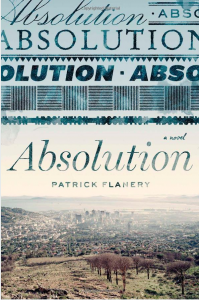 Clare Wald is a South African writer. She lives alone, with Marie, her ‘woman of business.’ Sam Leroux, an academic from an American university, has come to South Africa for a series of interviews with her, as he is Clare’s cautious choice as her authorized biographer. Clare is divorced; her son, Mark, is a lawyer with a wife and children. Her daughter, Laura, an activist during the last days of apartheid, is missing and is most likely dead – neither Clare nor her former husband has heard from her for many years.

The narrative unfolds in several dimensions, with alternating sections narrated by Clare, by
Sam, and by an unnamed narrator. There is an internal narrative, also named Absolution, that tells the story of Clare’s and Marie’s survival of a home invasion and their move to a new house with a wall surrounding the garden, a gate, a panic button, a security service on call, and watchful neighbors. Absolution relates several episodes in which Clare discusses the home invasion with a police investigator whose frame of reference is so different from Clare’s that there can be no meaningful communication between them. It’s not clear whether the home is a metaphor for all of South Africa, or just all of Clare’s life. It is clear that the home has become a prison to her.

Sam’s chapters describe his return to South Africa after many years abroad; his wife, an American journalist, joins him in Part II, when he is teaching in Johannesburg and writing his book. Through his eyes, we see the precautions residents take in the crime-ridden society that developed in South Africa after the violent transition from the apartheid system. Wealthy white people routinely lock their refrigerators and cabinets so that their domestics cannot steal food from them. Showers have locks so that in the event of a home invasion the resident can squeeze into a very small space and hope the invader will give up and leave. Marie urges Clare to consider building a second defensive ring around their house, so that deliveries can be brought inside the first wall but not collected into the second until the truck making the delivery has left the first perimeter.

Clare’s chapters are based on Laura’s notebooks, left behind and delivered to her by some of Laura’s fellow radicals. Laura has laid bombs that blew up a plant, and much of Clare’s narrative reconstructs Laura’s movements after the bombing. From the notebooks, Clare can tell that Laura’s ride to safety after the bombing never materialized, so Laura decided to hitchhike, and was picked up by Bernard, a trucker, and Sam, his ward. This decision possibly compromised Laura’s safety, and Clare dwells on the uncertainty of what happened to her.

As Flanery frames it, no one who lived in South Africa was guilt-free, and no one who lives there now can escape the legacy of violence. This is a complex novel, and an extremely assured one, told in the same even tone whether the topic is bombings, nightmares, murders, or a dinner party. I highly recommend it. There’s a lot of guilt, and a lot of fault, both of action and inaction. While the many strands of the story are knit together quite satisfactorily, Flanery leaves enough ambiguity to support several possible interpretations of the novel. Of all the many guilty characters, Bernard is the only one whose guilt seems simple to me. Do you agree? Let us know your thoughts in the comments.

I also blog about metrics for people who hate numbers here.