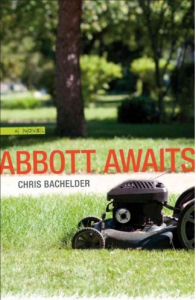 Abbott – husband, father, professor, and smallholder in the American dream – is awaiting the birth of his second child. It’s a long hot summer, and Abbott’s wife is often uncomfortable. And then there’s the golden Lab, who can best be described as a scaredy-cat. The novel consists of a daily (or nightly) glimpse into Abbott’s life and thoughts. Some are ruminations on events large and small, others are the seeds of an idea. There are some pure (and more impure) fantasies. Some chapters are a few sentences long, while others go on for a couple of pages. It’s the mind as palimpsest, as Abbott coasts or endures or celebrates, depending on his mood.

Some days the world is too much with Abbott. There’s the ennui of caring for a two-year-old: he and his daughter “take a hot morning walk around the neighborhood at a gruelingly slow pace. . . . He estimates the time by subtracting fifteen minutes from his most conservative estimate of the time, but then discovers that he is still ten minutes fast.” Abbott cleans the high chair and the gutters, “alternately repulsed and terrified.” He muses on aging, conformity, and marriage:

The rain gutter is an apt synecdoche of domestic existence: From the ground it appears practical, functional, well conceived. But when you stand on a borrowed ladder and peer into it, you realize what a gutter is. A gutter is a flimsy trough of sludge, secured by rusty hardware. Rainwater is not so much channeled and diverted as collected and absorbed.

Abbott is also a philosopher. In one chapter, ‘Abbott Hogs the Mood,’ he rationalizes his long-term possession of the bad mood because marriage, as he puts it, “is a battle–clinically, a negotiation–over the possession of the Bad Mood.” Fortunately, it’s a good marriage, and Abbott’s wife is forbearing.

Other glimpses make Abbott feel less forlorn. He is profoundly moved by his remarkable child, and the moments when he glimpses the world anew, through her eyes. (This is not to say that he is above ruminating on the possible origins of the songs his daughter is learning: the Jacobite Revolt or, possibly, the plague.) When an employee in a gorilla costume turns up during a rainy day trip to the bookstore, Abbott’s daughter is enraptured.

She is a conductor. She conducts wonder. Wonder passes from the world to Abbott through his daughter.

Have you read a better description of being a parent (on a good day)?

By turns sarcastic, sardonic, musing, earthy, and wonderstruck, Bachelder’s exploration of a man’s mind is rewarding and hilarious. Do you agree? What’s your favorite moment? Let us know in the comments.

Have a book you want me to know about? email me at asbowie@gmail.com. I also blog about metrics here.