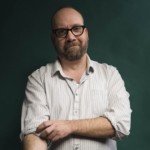 The story opens, “He has made a career out of playing life’s unlikeable oddballs—the needy losers and the creeps—but Paul Giamatti is fine with that. (His) identity is unusual for a Hollywood star: He’s an abrasive ass. Not in real life, you understand, but he has made his name playing them in films.

That’s fine by Giamatti. “I’ve played a lot of cynical characters,” he says. “Maybe that’s a good thing because I don’t get bothered much at airports.” The real Paul Giamatti lives in Brooklyn Heights with his wife, writer/producer Elizabeth Cohen, and their 11-year-old son Samuel.