Reflections On 1974 Brooklyn Heights From A BHB Reader 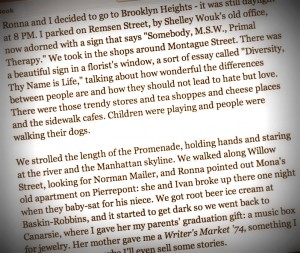 We’re plucking this endearing reader comment from the June 10 BHB post “Montague Street Is Stirring As It Hasn’t In Years,” which was contributed by Richard Grayson, whose musings on growing up in the borough are published in his multi-series e-book “The Brooklyn Diaries,” available on amazon.com here. Grayson was born in Brownsville in 1951 and now lives in Williamsburg. He has kept a daily diary entry—without missing a day—since August 1969, when he was an 18-year-old preparing to enter Brooklyn College.

He previews his journal entry from June 15, 1974: “Back in 1969 and throughout the early 70s, Montague Street was a wonderland for kids like me from the hinterlands of Brooklyn (Mill Basin). There were so many places to hang out and eat and cool stores. In my diaries I have lots of references to days and evenings spent on Montague Street. To me, it was the best street in Brooklyn, maybe in the city.”

And here are his innocent 20-something observations, coming to you live from 1974…

Ronna and I decided to go to Brooklyn Heights. It was still daylight at 8 p.m. I parked on Remsen Street, by Shelley Wouk’s old office, now adorned with a sign that says ‘Somebody, M.S.W., Primal Therapy.’ We took in the shops around Montague Street. There was a beautiful sign in a florist’s window, a sort of essay called ‘Diversity, Thy Name is Life,’ talking about how wonderful the differences between people are and how they should not lead to hate but love.

There were trendy stores, tea shoppes, cheese places and sidewalk cafes. Children were playing and people were walking their dogs. We strolled the length of the Promenade, holding hands and staring at the river and the Manhattan skyline. We walked along Willow Street, looking for Norman Mailer, and Ronna pointed out Mona’s old apartment on Pierrepont: She and Ivan broke up there one night when they baby-sat for his niece. We got root beer ice cream at Baskin-Robbins, and it started to get dark so we went back to Canarsie.”

You can sample more of Grayson’s everyman’s perspective on growing up in Brooklyn via the amazon.com link here… although with a Kindle price of 99 cents, why not indulge in the entire collective, right?

Postscript: BHB reader Andrew Porter adds: “Richard, the florist shop with the giant hand-written philosophical signs in the window was the old James Weir Florist shop on the south side of Montague. Although the store continues on the north side, the owner is, I believe, Weir’s son, and not given to philosophy.”