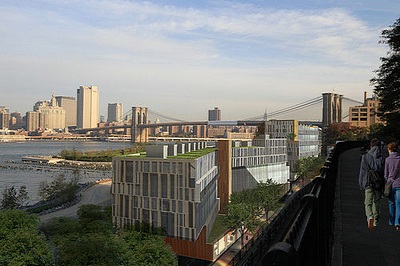 As anticipated, Mayor Bloomberg’s office announced today that the proposal for a hotel and residential complex on the space between Furman Street and Pier 1, Brooklyn Bridge Park submitted by Starwood Capital Group and Toll Brothers has been selected. The image (thanks to Curbed) shows how the buildings will look from the Promenade. As you can see, they will partially obstruct the view of the Brooklyn Bridge and largely obscure the view of Pier 1.

According to the Curbed article linked above, the hotel will have 200 rooms and the residential portion will have 159 units. The article also quotes from the Mayor’s press release:

The hotel will be named Hotel 1.