Bossert Not The Only New Hotel Around Town, As LodgeWorks Builds Downtown 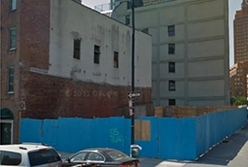 As the Bossert endures community and governmental scrutiny to potentially convert the Montague Street property back to a “first-class” hotel, a national chain intends to build a 117-room inn on a now-vacant lot in Downtown Brooklyn. This spring, Kansas-based hotel developer LodgeWorks acquired 0.11 acres/4,700 square feet at 125 Flatbush Avenue Extension, just west of the Manhattan Bridge entrance. The Real Deal reported in March that it paid $7.75 million for the site.

Brian Dunne, director of marketing for Benchmark Hospitality International, which operates a Hotel 718 that is scheduled to open Downtown this summer, told The New York Times that with so much residential development, Downtown is becoming an evening destination, rather than a neighborhood that empties when workers go home: “Brooklyn isn’t being viewed as the less expensive option to Manhattan. It’s a place people are starting to want to come to first rather than second.”

LodgeWorks’ hotel plan follows a previous attempt to build a similar property there, which fell through in late 2010. The company manages properties for Hyatt Hotels, Hilton Worldwide, Starwood Hotels & Resorts and Wyndham Hotels & Resorts. CEO Greg Epp says the new hotel will be “a well-known national brand.” LodgeWorks has not determined when they will break ground.

Downtown Brooklyn has seen a boom of new lodging of late. The 176-room Aloft hotel opened last year and the 128-room Hotel 718 will soon open, which includes a spa, rooftop deck and restaurant. The Brooklyn Bridge Marriott on Adams Street, meanwhile, has been deemed the official hotel of the Barclays Center, according to the New York Times article.