It Pays To Live In Brooklyn: We’re The Second Most-Expensive City In The Nation 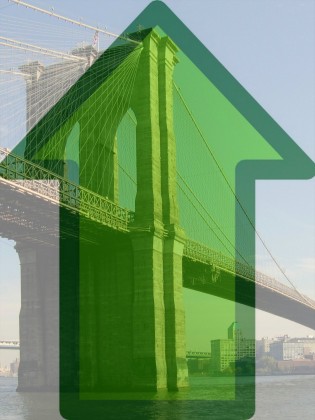 This isn’t necessarily the kind of statistic that fosters a giddy smile. According to a story in the Brooklyn Daily Eagle, Brooklyn is the second most expensive city in the nation, topped only by our sister to the west: Manhattan. The Washington-based Council for Community & Economic Research based its survey primarily on housing. There is no neighborhood breakdown, but past studies would obviously place Brooklyn Heights, DUMBO and Williamsburg at the peak of the borough’s hierarchy.

Behind Brooklyn are: Honolulu, San Francisco, San Jose, Queens and Stamford. Conn. The Council’s evaluation ranked 300 American cities based on other factors, as well, including utilities, transportation, grocery prices (damn you, Gristedes!) and prescription drug prices.

Using the number 100 to represent the national average, Brooklyn ranked at 183.4 overall: 129.9 in groceries, 126.4 in utilities, 104 in transportation costs and 111.1 in healthcare—along with a whopping 344.7 in housing. Manhattan’s average was 233.5. The Eagle points out that this means housing costs in Brooklyn are more than three times the average American city, like Erie, Pa., or Charlottesville, Va.

Borough President Marty Markowitz told the Eagle, “Brooklyn is thrilled that so many successful men and women, particularly in professional fields, have chosen to live here, adding to our economic diversity and making it one of the most desirable places on the planet to live, work and play. But we are also mindful that Brooklyn must never be a place of only the very rich or the very poor.”

Carlo Scissura, president of the Brooklyn Chamber of Commerce, added, “As Brooklynites, we want to be No. 1 in everything, but I don’t think we want to be Number 1 or 2 in this survey. We want to keep the middle class here. We don’t want them to leave.”

Custom House: Brooklyn Heights At Last Has A Hang