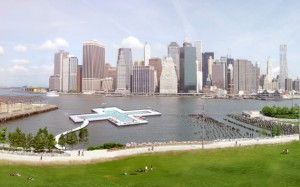 The possibility of a permanent 9,000 square foot floating pool in Brooklyn Bridge Park is being floated by a design firm that appears to be making strides amid a tenacious engineering, environmental and bureaucratic process. In an ideal world, the project, deemed “+Pool,” could become reality by Summer 2015. BHB first reported the project last June (link includes video). Mind you, this is a far cry from the 3-1/2-foot temp pool opening this summer at BBP’s Pier 2.

The +Pool would be designed as four pools in one: with children’s, sports, lap and lounge pools. Each can be used independently or combined to form an Olympic-length lap pool, or opened completely into a fully open 9,000 square foot pool.

Behind the ambitious feat are designers Dong-Ping Wong of Family Architects and Archie Lee Coates IV and Jeffrey Franklin of PlayLab. According to their website, “After we test and prove the filtration, we’ll go through the long and arduous process of getting required city and state approvals.” The project was launched with the ideal of improving use “of the city’s natural resources by providing a clean and safe way for the public to swim in New York’s waters,” they add.

Curbed reports in an interview with Dong-Ping Wong that among the challenges ahead: Traffic in the river causes waves that could move the pool around, so the team must figure out whether tethers will allow it to glide up and down. In addition, +Pool’s design filters river water through the its walls “like a giant strainer dropped into the river,” so it would remove bacteria, contaminants and odors, leaving only safe and swimmable water that meets city, state and federal standards of quality. The pool would be the first of its kind.

Permits, meanwhile, could take anywhere from six months to a year-and-a-half, while +Pool also needs additional funding from investors and the public (via Kickstarter).