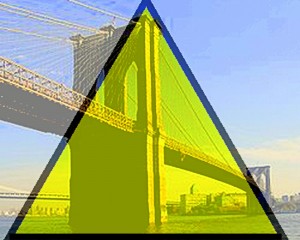 Is it wishful thinking or a truly sustainable business plan? A coalition that calls itself The Brooklyn Tech Triangle believes that the borough has a burgeoning technology sector, surrounding Brooklyn Heights within Downtown Brooklyn, the Brooklyn Navy Yard and DUMBO, where it claims technology tenants have proliferated into a mini Silicon Valley.

The group is now seeking formal proposals to help “solve transportation and infrastructure challenges in the area,” according to The Real Deal. The Brooklyn Tech Triangle coalition—comprising the Downtown Brooklyn Partnership, the DUMBO Improvement District and Brooklyn Navy Yard Development Corp.—wants to create a “master plan” that includes a team to rethink physical improvements, land use, transportation, and real estate and economic policy.

“Whether it’s computer-operated machinery, film post-production or high-end design, 21st Century manufacturing at the Navy Yard is being driven by technology innovation,” says Andrew Kimball, CEO of the Brooklyn Navy Yard Development Corp. “Our growth is only confined by the lack of space and access to mass transit.”

Alexandria Sica, executive director of the Dumbo Improvement District, adds that her neighborhood “has become the destination for the tech industry in New York City, and the master plan will be important to ensuring Brooklyn can keep growing its tech scene. We are looking for creative, tangible actions that we can take to meet the high demand for office space in DUMBO and ways we can grow these companies throughout the area.”

In May, two high-tech firms signed leases in the Brooklyn Navy Yard: Crye Precision, a manufacturer of body armor, secured 80,000 square feet; and Macro Sea took 50,000 square feet to create a lab that will bring together design professionals and digital manufacturers.

The Real Deal, however, counters that office space in Downtown Brooklyn had some of the highest vacancy rates in the nation late last year, although it notes, “With the arrival of New York University’s Center for Urban Science and Progress, the tide is turning in an area that traditionally housed mostly the back offices for large financial services firms.”