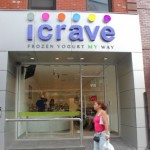 Frozen yogurt shop iCrave at 115 Court Street (across from the United Arists/Regal movie theater on the Downtown BK border) has been prepping for business since BHB first noted its imminence in March. Its doors opened this week, just in time for the next summer heatwave. iCrave’s ware: self-serve frozen yogurt with “21 fantastic flavors” and “savory smoothies.”

Ironically, Yogo Monster previously gave it a whirl in the same space, serving same and shuttering in 2010, followed by failed deli/coffee shop Z-7 Cafe… not to mention a similar menu at Red Mango a few doors down at 123 Court Street. (Photo: Brownstoner)

Image Of The Day: A Haunting Nighttime View From Fulton’s Landing