﻿Brooklyn Bugle Book Club: “The Taste of Place” by Amy B. Trubek 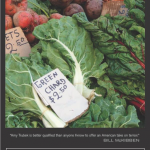 In “The Taste of Place,” Amy B. Trubek, an anthropologist who has studied the production of food and wine, and has also served as executive director of the Vermont Fresh Network, explores the different cultural backgrounds that express themselves in the concept of terroir. Terroir, a French word derived from terre (land), is a complex concept that means different things in different places. Trubek has translated it as “the taste of [a] place.” Her book explores the different backgrounds chefs, sommeliers, purveyors of food and drink, and consumers have given the term in France and in different areas of the U.S.

At its narrowest meaning, “terroir,” which grew out of the efforts of the various French authorities to protect the names and makes of its wines, means grown in the same spot. As the French Wine Guide website puts it:

A “terroir ” is a group of vineyards (or even vines) from the same region, belonging to a specific appellation, and sharing the same type of soil, weather conditions, grapes and wine making savoir-faire, which contribute to give its specific personality to the wine.

Terroir is the basis for the Appellation d’Origine Controlee (AOC) label you see on some French wines. (Trubek describes the system’s history; a wonderful companion book is “The Discovery of France” by Graham Robb.) But, as Trubek explains, the concept of terroir has had many more meanings layered on: it has been extended to cheese, to olive oil, to Italy. It now even describes an entire cuisine, cuisine du terroir, which some people argue is a manifestation more of nostalgia. And it means different things in the US, where we have become accustomed to doing our shopping in large supermarkets and consuming fruits and vegetables that have been bred to travel long distances successfully, rather than for flavor.

In the US, chefs and restaurateurs have adapted and extended the concept, embracing a local or regional cuisine under the label. Alice Waters and Chez Panisse may be the most famous example, but Trubek explores restaurants and food and wine production in Wisconsin and Vermont, in a fascinating discussion of the role of culture in food production, preparation, and consumption. In the course of it, Trubek comes to a new and deeper definition of what the “taste of place” can mean:

The regional foods that make up a cuisine du terroir taste of the land from which they come. Certain plants and animals are adapted to a particular spot–its soil, rocks, and climate–and draw out a distinct flavor. Among foods from a single locality, strong harmonies can occur. Historically, such foods developed slowly, and generations living in one place tended to favor what worked well and tasted best, other things being equal.

Trubek’s examples include hickory nuts in Wisconsin and maple syrup in Vermont. And while she argues that chefs might be leading the way, there are increasingly arrangements in the US to get produce more directly from farms to the table. Community Supported Agriculture, local farmers’ markets, and regional food suppliers like Friends and Farms all contribute.

The book is itself a blend, of lively personal stories and somewhat stodgier academic texts. I can’t tell which preceded the other, but the blend is not always successful and parts of the book are a slog. But overall it’s a fascinating, educational journey, that rewards the perservering reader with a deeper, more nuanced understanding of local food growing and preparation. Do you agree? Are you changing the way you buy and prepare food? Let us know in the comments.

Restaurants and recipes from Cheryl Tan, author of A Tiger in the Kitchen