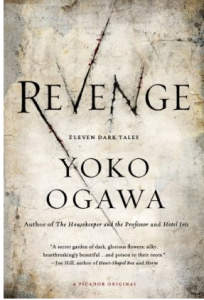 “Revenge,” Yoko Ogawa’s extraordinary new book of intricately, meticulously linked short stories is subtitled “Eleven Dark Tales.” The stories all take place in the same part of a city. It’s a perfectly ordinary city, with a square and a clock tower. “You could gaze at this perfect picture all day–an afternoon bathed in light and comfort–and perhaps never notice a single detail out of place, or missing.” The characters run into each other, shop in each other’s stores, live in the same apartment buildings, gossip about each other, appear and disappear. It looks like a placid, ordinary town. Except that beneath the surface lie death, destruction, murder and despair.

In one story, a woman waits all afternoon in a bakery to buy the strawberry cakes for her son’s birthday. The shopgirl talks on the phone, and weeps. It seems reasonable enough, though the woman seems ready to wait a long time. She tells another shopper why: “My son is six. He’ll always be six. He’s dead.” That’s the first of the many turns Ogawa has in store for us. In the next story we learn a bit about the shopgirl’s past, from a male friend of hers. In another story, two co-workers are sorting doctors’ lab coats, readying them for the hospital laundry. The more senior complains about her married boyfriend, Dr. Y In a third story, a bag maker goes to the hospital to visit a client. Dr. Y is being paged as the bag maker crosses the lobby. We know by now that Dr. Y is dead. Why doesn’t anyone else?

Each story has an unexpected turn, twisting but eminently plausible. Each story is narrated in the first person. Is it the same person? Sometimes the narrator is male, other times female. Who is seeking revenge? Who is not? It’s not just the people who turn up again, but things do, too: kiwis. Carrots shaped like a human hand. A Bengal tiger. A dead hamster. Strawberry cakes. A refrigerator. The details shift in every story. Every time an object reappears its shape and its meaning have changed. Each character’s role, and perspective, shifts slightly from story to story, as if Ogawa is turning her characters in a kaleidoscope. And with every turn, the previous story looks different.

The prose, translated from the Japanese by Stephen Snyder, is limpid and simple. You inhabit the spaces around the big central square with the characters, walking down the streets and listening to the clock in the tower strike the hours. You go to fancy restaurants and fast food ones; you are in a train listening to a group of children sing Brahms, and at the zoo, eating ice cream on a cold day. It’s an immense achievement, one beautifully written story after the next. And the book stays with you as you think through the connections. It’s not scary, though it is penetrating.

It’s one of my favorite books of the past year. What do you think? Let us know in the comments.

Brooklyn Bugle Book Club: “Her: A Memoir” by Christa Parravani

Brooklyn Bugle Book Club: “The Affairs of Others” by Amy Grace Loyd