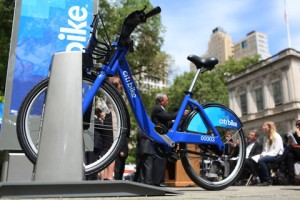 For those anticipating New York City’s Bike Share Program, which included locations in Brooklyn Heights, Brooklyn Bridge Park and nearby Downtown Brooklyn, you might as well hang up your helmets.

The 600 city bike share stations, which were scheduled to be in place by the end of July, have been stalled until late summer, according to NYC Mayor Bloomberg, because of a computer software glitch. In typical flippant fashion, Bloomie told the New York Times City Room blog, “It’s fascinating. The people who did not want bicycle lanes at all are now screaming, ‘Well, where are they? Where are they? I want them quickly.’”

It’s unclear when the software issues will be resolved; the program’s website assures a start date sometime before the end of the summer. The bike share kiosks’ glitch appears to have to do with touchscreen monitors that allow riders to pay with credit or debit cards.

The program is sponsored by the city Department of Transportation with Alta Bicycle Share. DOT released a draft map of the first locations last month. The solar-powered, wireless docking stations will be located on sidewalks, curbside road space and plazas, and accommodate between 15 and 60 bikes each.