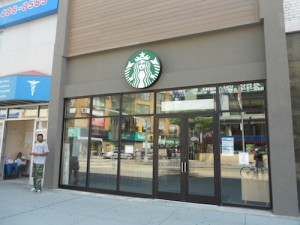 While it’s certainly no problem getting a morning java fix in Brooklyn Heights, a new Starbucks is coming to Fulton Mall, at 348 Fulton Street, next to Bank of America and across from Shake Shack. Obviously, the ubiquitous chain is demonstrating belief in the rapidly gentrifying Downtown Brooklyn nabe.

In May, the Heights’ Bucks relocated to 134 Montague Street from its former location at 112 Montague. Meanwhile, The Brooklyn Daily Eagle reports that the new location has posted signage and appears to be nearly ready to open inside. It’s located in a one-story building that most recently was home to men’s clothing store Porta Bella, and has 1,334 square feet of floor space.

Already over the past month or so, the area’s onetime primary shopping mecca has welcomed the Gap Factory Store, with Century 21, TJ Maxx, H&M and the massive multi-use City Point on the way.

One Mom’s Battle Against the Wack Jobs of Brooklyn Heights

Nydia Velasquez Over Ben and Jerry’s