Looking Up: Half-Dozen Skyscrapers On The Rise In Downtown BK 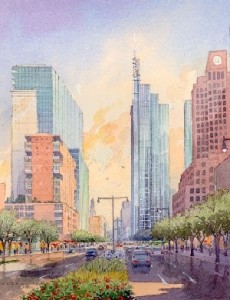 It appears the historic Williamsburg Bank building at 1 Hanson Place, which stood for decades as the tallest structure in Brooklyn, at 512 feet & 37 stories, is now just one of the crowd. As gentrification continues in Downtown Brooklyn, at least a half-dozen highrise residential towers are in the works.

The New York Observer tallies the progress, noting the skyline along Flatbush Avenue “has been utterly transformed” in recent years, as six new apartment towers rose during the last building boom: the Toren, the Brooklyner, the Oro, Avalon Fort Greene, the DKLB and Forte.

Adding to those projects (with BHB research from Brownstoner, Real Deal, Curbed):
* The Oro 2 at the corner of Gold and Johnson Streets is now getting off the ground, which will rise to 35 stories with 208 apartments.
* Billionaire John Catsimatidis is preparing the second of four buildings on Myrtle Avenue between Ashland Place and Flatbush Avenue in Downtown Brooklyn. At the end of June he filed for a 15-story mixed-use building with 160,000sf of residential and 13,000sf of commercial.
* 29 Flatbush Avenue, where construction is well under way. The 42-story rental building is slated for 2013 completion.
* Two Trees is developing a formerly city-owned property at Flatbush & Lafayette near BAM, which is said to include a residential tower and public open space.
* City Point Phase 2 facing Fulton Street Mall, is set to begin construction in the coming months. The nearly complete Phase 1 (due to house Century 21) comprises 45,000sf of retail space; while Phase 2 will include a 250-unit 19-story tower and a 400-unit 30-story tower—both residential rental—connected by a four-story structure containing a half-million square feet of retail. Phase 3 is supposed to be a 54-story tower, but so far remains penciled in on the drawing board.
* Still in the planning stages: The Hub from movie moguls David and Douglas Steiner, which calls for a 52-story, 720-rental unit tower at Flatbush and Schermherhorn.
* 85 Flatbush Avenue Extension—a triangle-shaped parcel at Flatbush, Tillary and Duffield—remains ripe for development, after Brooklyn-based North Development Group, led by developer Isaac Hager, planned to build a 21-story, 108-unit residential condo tower at the vacant site, which stalled at year-end 2011.