As the BHB has been regularly following, the former Brooklyn Eagle building at 30 Henry Street & Middagh—purchased for $3.5 million in November 2011 by DUMBO-based developer Fortis Manor—was approved by the Landmarks Preservation Commission in December for a five-story, six-unit condo building to take its place.

On May 17, the new owner filed a permit for building demolition, and they’re wasting no time getting down to business: The block is now surrounded by plywood fencing along the front and north side, as the Eagle prepares to take flight and, uh, tumble to the ground.

Plans for the replacement red brick structure include underground parking and a courtyard with waterfall. See rendering below.

The Brooklyn Eagle building was constructed in 1963 and although landmarked, the Preservation Commission was easily convinced that the historic value of the one-story structure was of little value. And so it goes… 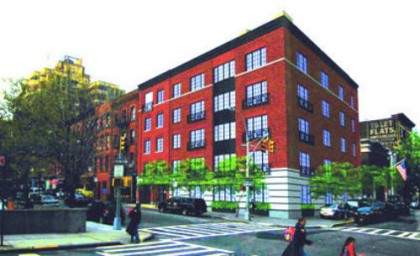 Image Of The Day: A Haunting Nighttime View From Fulton’s Landing

Borough Hall: You Got The Look!