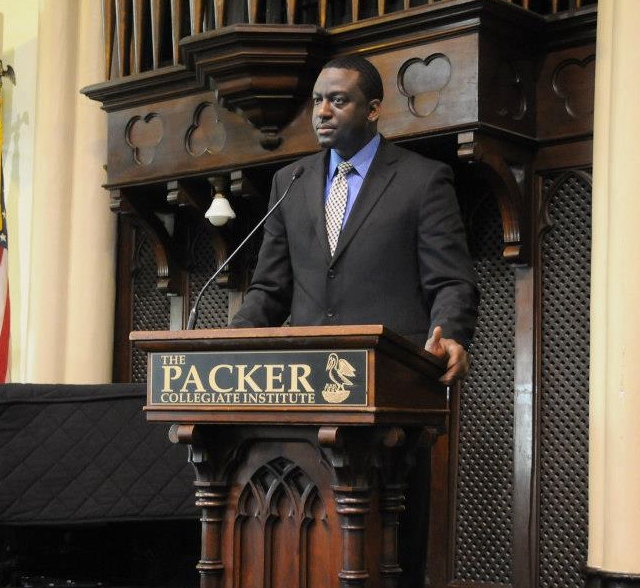 On Wednesday at the Packer Collegiate Institute, students and faculty listened raptly as two members of the Central Park Five shared their stories of being arrested, convicted, and jailed for the infamous 1989 Central Park jogger assault—a crime they didn’t commit.

Raymond Santana and Yusef Salaam spoke to members of the Packer community for two hours, explaining how they came to be arrested and convicted, and later exonerated.

The event was coordinated by Alice Lurain and Sarah Strauss, who teach chemistry and history respectively in Packer’s Upper School. Lurain teaches an elective in forensic chemistry, Strauss one in criminal justice, and last year, they began to talk about a way to offer inter-disciplinary work to their students.

“Sarah and I had spoken last spring,” said Lurain, “about getting a speaker who could talk about the use of forensic evidence, possibly in exonerations, as a way to begin our collaboration between our classes so that the students would have a more concrete understanding of why it was important to examine science and the law as fallible human institutions that can be improved if we understand their limitations.”

And at a conference last summer, Lurain found exactly the speaker she was looking for.

“I attended the American Chemical Society meeting,” said Lurain, “and there happened to be a symposium co-sponsored by the Division of Science and Law and the Innocence Project. I heard three exonerees, one of whom was Raymond Santana, speak, along with a number of forensic chemists and other people involved in law enforcement. That prompted Sarah and me to contact the Innocence Project back in August about the possibility of having Raymond visit Packer.”

“Raymond’s story really struck me, particularly because he was so young at the time of his arrest,” she said. “We had no idea that their case would begin to get so much press with the release of the documentary and the book.”

The film is The Central Park Five a documentary produced by Ken Burns, his daughter Sarah, and David McMahon; it  was released last fall in the United States and is currently showing at the IFC Center.

Joining Santana and Salaam was Edwin Grimsley, a case analyst at the Innocence Project, which is based in downtown Manhattan.

“Can you imagine,” Salaam began, “being at school, leaving to go hang out with your friends, doing what normal kids do, and then a portion of them don’t show up because they were kidnapped by the police department?”

A naïve teenager, he learned that the police were looking for him, and his first instinct, he said, was to go to the precinct and tell them he hadn’t done anything.

“It was a no-brainer for me,” he said. “’I’m going to tell them, and my name will be off this list.’ I came home seven years later.”

Arrested at age 15, Salaam spent five and a half years in prison and three more on parole before being exonerated in 2002.  Santana was 14 when he began his five-year term.

“One decision,” Santana told the Upper School students gathered in Packer’s chapel, “going to hang out with my classmates, some guys from the neighborhood, changed my life.”

Both Santana and Salaam were classified as sex offenders and had to register with local precincts every time they moved.  Following their exoneration and the publication of Sarah Burns’ book on which the movie is based, the men feel that they have been able to re-claim some pieces of their lives.

“It’s awesome for people to embrace us,” said Santana. “It says how far we’ve come as a city.”

Salaam concurred. “We’ve been welcomed back, back into society.”

Neither man, though, was so generous that he’s put what happened wholly behind him. Santana still feels the sting of losing his mother to cancer while he was incarcerated and of her never knowing that he’d been exonerated.

Salaam spoke bitterly of Mayor Koch and Donald Trump. Koch was captured on camera at the time proclaiming gleefully, “We got ‘em!”, while Trump took out full-page ads in city newspapers calling for the death penalty to be reinstated so that the five convicted boys could be executed.

Despite the exoneration, the city has never publicly apologized to the Central Park Five or admitted any wrongdoing in the handling of their cases. The other men who were convicted and exonerated are Antron McCray, Kevin Richardson, and Kharey Wise.

Said Salaam, “We channel our rage into coming to schools and talking to students.”

“We love these engagements because of you guys,” Santana told the students. “Nobody wanted to invest in us, and we decided to invest in you, by telling our story.”

Disclosure: The author has taught at Packer since 1998.