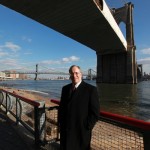 Manhattan borough president Scott M. Stringer has proposed a beachfront park with kayaking, marshlands and a pedestrian bridge—on the other side of the Brooklyn Bridge—in a plan that appears to mimic many of Brooklyn Bridge Park’s amenities.

Stringer’s East River Blueway Plan, announced Thursday in his State of the Borough speech, calls for a public beach and kayaking directly beneath the Brooklyn Bridge, creation of two boat launches at Stuyvesant Cove at the ends of 20th & 23rd Streets, and installation of marshlands & sea walls in vulnerable flood zones. He also discussed a pedestrian bridge to elevate bike and pedestrian paths over F.D.R. Drive at 14th Street.

The New York Times reports today that the plan involved public meetings with community groups and consultations with seven city and state agencies. Stringer: “We want to open the waterfront from a recreation perspective, but we also want to protect our fragile waterfront by recognizing the reality of storm surges.” Stringer has already pledged $3.5 million in capital funding toward new marshlands.

Transit Museum hosts discussion of Hurricane Sandy, its aftermath, and the MTA