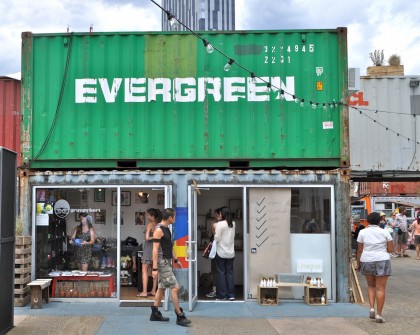 Following a June mandate to vacate its Downtown Brooklyn digs as the burgeoning mixed-use City Point project begins a new phase of development, urban foodie & retail oasis Dekalb Market was intending to scout out a new space for the holiday season. But it looks like we can fuhgeddaboudit. The Brooklyn Paper reports that the space—which opened last year at Flatbush and Willoughby Avenues—will not reopen this year after it shutters on September 30.

According to Adam Zucker, a spokesman for Urban Space, the firm that runs the shipping container bazaar, it is continuing to seek out the right site for the collective: “Look, we are a 60-container market and there are not that many available spaces that are the right fit in terms of size, location, and long-term status. Long story short is we need to find the right new location.”

That, however, has a number of the small business owners that populated Dekalb Market up in arms. They say they’re now stuck without a place to peddle their wares this fall and winter because Urban Space broke their leases to make room for development on the Downtown lot, then failed to find a new site for the market. The company previously promised to “move and reopen in the space of a few weeks” when it announced it would vacate the current market to make way for City Point development, which will include a Century 21 and potentially Brooklyn’s tallest building, Brooklyn Paper says.