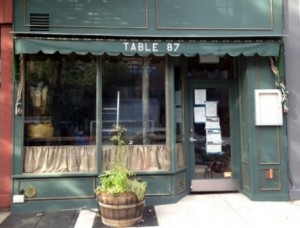 As first tipped on BHB’s Open Thread Wednesday in late June, a new restaurant has been bubbling at 87 Atlantic Avenue, between Hicks and Henry streets in Brooklyn Heights. Now it appears that Italian eatery Table 87 is fixing to open its doors. According to Brownstoner, work permits and an application to sell wine & beer are posted in the window. The space used to house Dallas Jones BBQ.

Tonight! BBP’s Voter’s Choice ‘Movies With A View’ Finale Is…