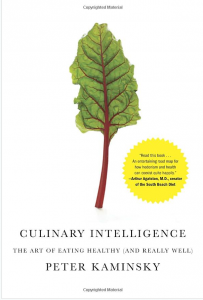 “Culinary Intelligence: The Art of Eating Healthy (and Really Well),” by the food writer Peter Kaminsky, provides a lively and light hearted tour through a serious subject. We live in a society of plenty, where processed foods filled with fat, sugar, and salt are readily available. But they make us fat. According to the New York Times, two-thirds of American adults, and one-third of American children are overweight or obese. In his late 50s, Kaminsky came to a medical crossroads: his weight was high enough to put him at risk of diabetes. As he puts it: “How does a guy who loves food and wine–in fact, makes his living writing about them–gain control of what he puts in his body?”

In this book, Kaminsky provides the answer, along with recipes, and a memoir of some good meals. The key is what he calls Culinary Intelligence, or CI. The principle is simple: “Buy the best ingredients you can afford. Cook them well.” How do you do this? Kaminsky devotes the rest of the book to recommendations for ways to keep eating pleasurable, joyful, and healthy.

The first corollary is something Kaminsky calls Flavor per Calorie. Taste is extremely important to the enjoyment of food, of course, not to mention safety – bad taste can be a warning that a food is spoiled or dangerous. Kaminsky reports that taste does not end in the mouth. Recent research has shown that we also have taste receptors in our stomachs. And if those taste receptors are satisfied, because what you have eaten tastes good, then you will quickly feel full. Or, as Kaminsky puts it:

It stand to reason, then, that if you get more taste bang for the bite, then you won’t need so many bites. If your food is indifferently prepared from ingredients that lack flavor, the only alternative is to pile on the high-calorie combo of sugar, salt, and fat.

Corollary two: Avoid processed food. Think about what is in the food you’re buying. Check out the labels, and avoid anything with too many multi-syllabic ingredients. Corollary three: Buy local if possible, because food that has traveled may have been grown to withstand the rigors of travel, rather than for taste (think of the supermarket strawberries you get in March, for example). And, corollary four: Cook your food in a way that adds flavor – there’s a small section on spices, and a much longer one on caramelization.

There’s not too much science in this book. (If you want to know the difference between caramel and caramelization you’ll have to go elsewhere.) Kaminsky refers, several times, to Michael Pollan’s “The Omnivore’s Dilemma” which everyone interested in food and food production should read. Brownstone Brooklyn readers will enjoy Kaminsky’s mentions of local shops. Because Kaminsky also focuses on what to do day to day, when to bend the general rules, and how to cope with restaurants, this spritely book outlines a philosophy that anyone can follow. Do you agree? Let us know in the comments.

I also blog about metrics here. Have a book you want me to know about? Email me at asbowie@gmail.com