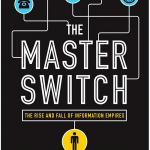 Information wants to be free. The Internet is different. Net neutrality. Or, as Tim Wu puts it in his surprisingly compelling economic history “The Master Switch,” “it has become a commonplace of the early twenty-first century that, in matters of culture and communications, ours is a time without precedent.” In fact, according to Wu, the Internet is only the latest in a series of information technology shifts that changed the means and speed of transmission.

Wu shows that over the last century and a half (and probably longer, but Wu goes far enough back to make the point) information technologies have shifted between open, like the Internet is now, and closed – think movies or TV.

History shows a typical progression of information technologies: from somebody’s hobby to somebody’s industry; from jury-rigged contraption to slick production marvel; from a freely accessible channel to one strictly controlled . . . History also show that whatever has been closed too long is ripe for ingenuity’s assault . . . This oscillation of information industries between open and closed is so typical a phenomenon that I have given it a name: “the Cycle.”

Wu traces the communications industries of the 20th century through the cycle – movies, radio, television, telegraph and of course the telephone. Younger readers will not remember the shock of the AT&T breakup after a lengthy antitrust lawsuit but might, perhaps, recall the disaster that was the AOL-Time Warner merger. Wu describes both in detail, and well, particularly the latter. The failure lay in the idea behind the merger – that AOL’s customers would pay for Time Warner content, and that Time Warner customers would become AOL users. “The only problem with this idea was the Internet.” By the time of the merger, regular users did not need AOL to reach the Internet. “Once online, a user could go wherever he wished, the Internet being set up to connect any two parties, whoever they might be.”

Wu’s case for the existence of the cycle is convincing, and in the final chapter of his book he proposes an answer to the questions he raises – to what extent should the US Government interrupt or slow down the Internet’s experience of the Cycle? His answer is “somewhat.” Information industries have long been regulated in this country (that’s what the FCC, for example, does). He suggests what he calls a Separations Principle, “the creation of a salutary distance between each of the major functions or layers in the information economy. It would mean that those who develop information, those who own the network infrastructure on which it travels, and those who control the tools . . . or access be kept apart from one another.” The government also needs to keep its distance, except for some enforcement activities.

Will it work? What’s your response to Mr. Wu’s argument? His prescription? Please let us know what you think in the comments.