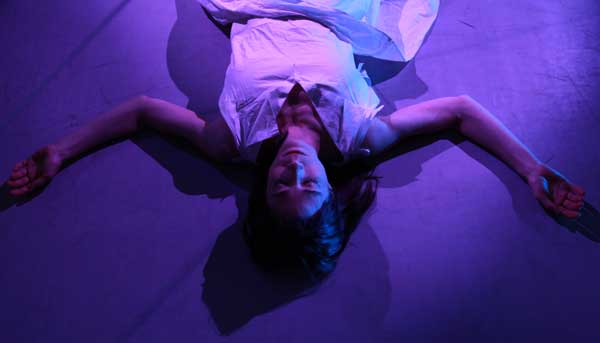 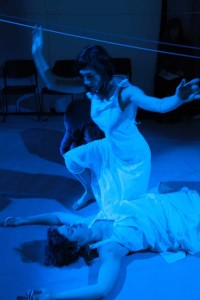 A long-held taboo becomes a source of transformation in Carrie Ahern’s newest piece, as the dance and performance artist invites her audience along on an odyssey through death, daring to navigate its darkest depths and chart a new course of celebration and connection.

The work is actually a continuation of Ahern’s “Borrowed Prey” project, a diptych whose first part examined the connections between humans and the animals that many of us consume. Performed in New York City in the spring of 2012, “Borrowed Prey: Part I” delved into the “farm to table” process, with Ahern’s own forays into hunting, butchering and slaughtering serving as the main basis for the work. In essence, it centered on human-to-animal empathy framed in the context of death. Ditmas Park-based Ahern continues her probe into death in the project’s second part, but this time with a focus on human-to-human empathy.

“Borrowed Prey: Part II” sprung from a very personal place, as the father of Ahern’s then-boyfriend was dying of Alzheimer’s during the same period that the choreographer was in the early planning stages of the project.

“My biggest feeling was that there just seemed like there needed to be a better way to deal with the end of life,” explains Ahern, who first began mulling over the concepts that would serve as the inspiration for “Borrowed Prey” in 2009. “How we die is now so related to this outsourcing of care to other people, just like what happens with animals. But it is very different in that the animals that we eat are killed at the height of their lives, whereas we now often prolong human life to an extent that poses questions about what is ethical in those terms or not.” 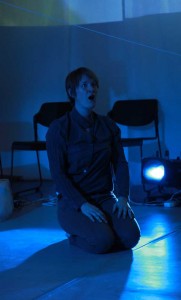 During the creative process that culminated in “Borrowed Prey: Part II,” Ahern discussed these questions at great length with two of her collaborators, Park Slope-based dancer Carolyn Hall and composer Anne Hege, who both perform alongside Ahern in the piece. Much as Ahern had been grappling with how to deal with death because of her up-close encounter with suffering, Hall and Hege had also been going through losses of their own, with the experiences of all three women serving to shape the work in a profound way.

“This piece is very personal for me,” Hege says. “My brother passed away four and a half years ago and I had a really negative hospital experience,” explains Hege, who felt as though life support caused her sibling’s spirit to struggle in a way that might not have happened otherwise. “He was kept on life support because he had opted to be an organ donor and there was really a sense of the power of his body, even with all the machines. He had been declared dead, but he was still so spiritually present. I feel like this piece gets at some of that in a really interesting way.”

Indeed, at the heart of “Borrowed Prey: Part II” is a quest of sorts to recover and reconnect to those life-affirming rituals that have been lost in our modern obsession with staving off death until the last possible moment. The 80-minute, multi-disciplinary performance has been informed by a multitude of influences, including “The Tibetan Book of Living and Dying,” Ahern’s training as a hospice volunteer and each performer’s visualization of her own imagined burial process. 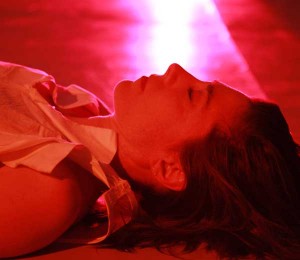 “What has been really interesting for me is finding a way to remain emotionally connected but put it into a ritual that honors life rather than grieves for death,” says Hall, whose parents both died shortly before she began working on the project with Ahern. “I think that is actually where this piece journeys for me personally,” Hall explains. “It starts in a place where death is a hard thing to digest to where actually the life that passed is worth celebrating.”

It is Hall who starts off the piece, with a solo that finds her crouched naked on a stark metal table. As she begins to move, eery video images of her shot by collaborator Harrison Owen are projected onto flowing white curtains that surround the performance space.

“The video is a brand new element for me in my work,” Ahern notes. “I think that I wanted there to be a play between what people are actually comfortable looking at – her or the video. Because her solo is a little bit grotesque, as is the video.”

It is striking how vulnerable and alone Hall seems at the beginning of the performance. But as the piece progresses, it moves from a place of isolation to one of interconnectedness, as the performers take the audience along on an evocative journey fraught with emotion that is conveyed through movement and sound. 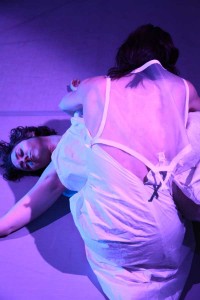 Long-time collaborators who first worked together 17 years ago, Ahern and Hall share a level of comfort with each other that shines through in their interactions during the piece. At times, one seems like an extension of the other, as they move together in beautiful unison, both dressed in white cotton costumes designed by Naoko Nagata that are reminiscent of burial shrouds.

Throughout the performance, the dancers are constantly navigating a shifting web of tethers that serve as both visual stimuli and a source of sound. Music and movement meld together when the dancers hold onto the strings, as many of them are GameTrack tether controllers that are connected to special pods programmed with sounds composed by Hege. “Depending on how we pull the tethers, that triggers different kinds of sounds and different volumes in different parts of the piece,” explains Hege, who used the open source sound synthesis program ChucK for the project.

The constant shifting of the tethers to different points of the performance space also acts to bring about a sense of expanding connection that eventually envelopes the audience itself, as the piece ends with different spectators being given the strings to hold as the final dance sequence unfolds before them. “When you are tethered to something, it is such a strong metaphor,” Ahern says.

Ahern and Hege plan to further explore these themes of connections and death in future workshops that will focus on community rituals that use movement and sound to support the grieving process. 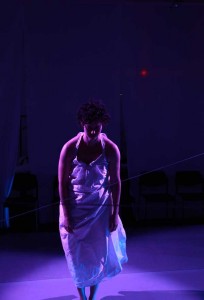 “I think by people looking at death a little bit more and getting a little bit more connected to it, they may gain a new perspective and see that it is not necessarily so dark and fearful,” Ahern says of her new work. “And I think there is potential for the kind of support that we are currently lacking culturally. Death does happen to a community, so what kind of ritual can we give people to support the grieving process?”

“Borrowed Prey: Part II” runs through Friday, December 13 at Alwan for the Arts. Tickets are available for purchase at Brown Paper Tickets. 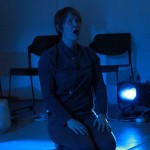 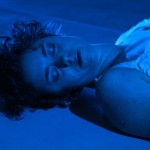 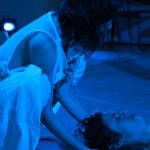 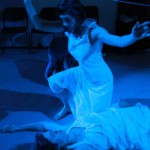 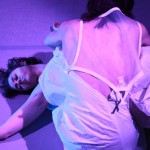 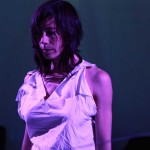 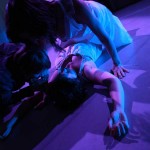 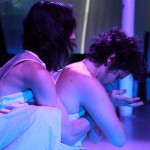 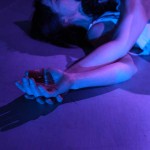 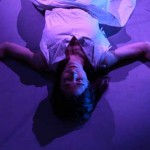 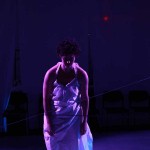 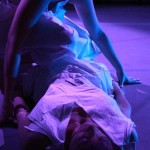 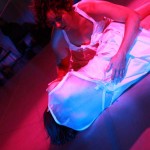 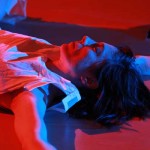 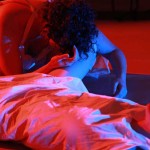 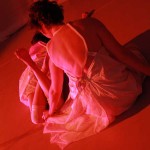 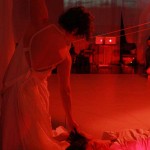 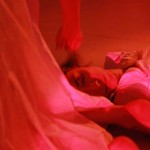 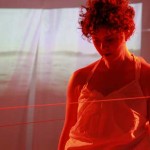 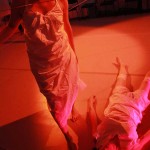 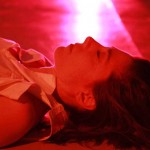 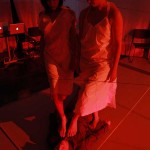