While her brother in law Jay-Z was grabbing headlines this week opening the Barclay’s Center, Solange Knowles dropped what is arguably the song of the year on Tuesday.

The Carroll Gardens resident’s catchy new single “Losing You”, produced by Williamsburg’s (by way of Essex, England) Dev Hynes is already garnering critical acclaim. And if that’s not enough Brooklyn for you, it’s been released on Terrible Records, the label run by Grizzly Bear bassist Chris Taylor. 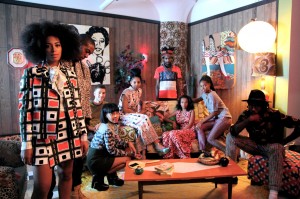 You need look no further than Spin’s Phillip Sherburne, who bestows the song with the distinction of being a game changer to know that it’s one of the most remarkable tunes of 2012:

“Losing You,” produced by Blood Orange’s Devonté Hynes, isn’t without its precedents, though; in fact, it fits in nicely with the retro-leaning, R&B-inflected house that’s all over the so-called underground right now. There’s not really a name for this stuff, despite Seth Troxler’s best efforts to make the term “underground pop” stick — thankfully, it hasn’t — but you can hear it running through a loose network of dance-music DJs who have jettisoned cold, Teutonic techno in favor of Latin freestyle, vintage vocal house, and other sounds that make sense at the Miami and Los Angeles rooftop parties where they hold court. Jamie Jones, Lee Foss, Soul Clap, the Wolf + Lamb extended family, and Damian Lazarus’ Crosstown Rebels crew have been caning the hell out of this aesthetic for a while now, and it’s clearly been taking hold, making its way into the Beatport sales charts alongside much more obviously overground electro-house fare. For Solange and Hynes to have picked up on the trend and brought it back into the R&B fold suggests that, whatever you’re going to call it, the sound has well and truly arrived. About damn time: Anything to save us from the deluge of over-compressed trance stabs and moombah-trap silliness that currently defines the overlap between “urban” and “electronic” music. There’s plenty of mediocrity in the wannabe-Balearic house scene too, but in the hands of Solange and Hynes, it feels like a breath of fresh air.

The video, filmed in South Africa by Melina Matsoukas, is a beautiful mosaic of fashion, color and style. While her older sister may be a better dancer by normal standards, Solange’s stomp will make you instantly fall in love with her.

Manhattan-Bound Brooklyn Bridge Lanes Closed This Weekend and Next