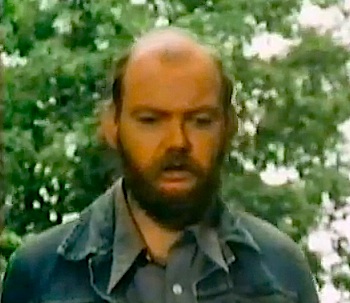 BHB legend has it that our own Claude Scales once “starred” in a Zombie flick. Okay, it’s not really a secret, but now an Italian movie fan is giving the film a big thumbs up. Or maybe it’s really a big che diavolo è che. Watch the full clip after the jump.

Self Absorbed Boomer: In the second installment of my Dewey & LeBoeuf saga, I told how my late friend Charlie McCrann wrote a feature length horror movie script as an NYU class project, then later produced, directed, and starred in that film, in which I played a minor role. The movie has been released in various places and formats under various titles: Forest of Fear, Charlie’s working title, in Asia; Bloodeaters, by which it was known at movie houses and drive-ins coast-to-coast in 1980-81; Blood Butchers I’m not sure where; and Toxic Zombies, under which it was packaged as a VHS tape, later DVD, and played on the USA Cable network.

Now I’ve learned that it’s been revived in Italy under the title Il ritorno degli zombi (The Return of the Zombies). The video above is of a review by “Mr. Massy” who, I gather (my Italian doesn’t go much beyond ciao and O che sciagura d’essere senza coglioni!, my favorite quotation from Voltaire), does not think much of the film. Perhaps there’s a strong hint in the graphic at 0.33. There’s a snippet of my part, the very end of it, in which I die perhaps the least gory death in the movie, starting at 10:50.