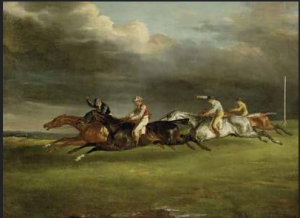 “Derby Day,” the latest offering by the British novelist D.J. Taylor, follows the owner, would-be owner, and bettors on a horse in a several months-long run-up to the annual running of the Epsom Derby. The would-be owner is Mr. Happerton, a man of no particular means though a great deal of interest in racing; he is out to make his fortune by running a horse in the Derby. He has set his sights on a horse named Tiberius, and uses three methods, all unscrupulous at best, in order to acquire it. First, he sets out to buy the paper memorializing the debts and security of the present owner, Mr. Davenant. Second, he courts and marries Rebecca Gresham, the disaffected daughter of a successful attorney, and his wife becomes a conduit for her father’s money. Third, using intermediaries, he sets in motion a daring robbery of a jeweler’s shop.

These three threads contribute to a rich and layered portrait of Derby Day. The Derby, held in mid-June, has been run since 1780, and is still run today. The year of the events in the novel is not specified, but it must be sometime in the late 1860s or early 1870s. In the novel as now the race is surrounded by a fair. It’s a national event, and, in the novel, interest in the outcome is widely shared, with bets placed by everyone from the lowliest housemaid up through the social strata to various aristocrats.

And virtually every character in this sprawling novel is interested in the race as well. Mr. Happerton forces Mr. Davenant, a widower with a developmentally delayed daughter, Evie, to sell the horse. Mr. Davenant has a loyal friend and neighbor, Mr. Glenister, who follows the course of his friend’s misfortunes, and wants to see what happens with the horse. Mr. Glenister also finds Evie’s young governess, Miss Ellington, an attractive conversational partner. Various other characters, including the police officer Captain McTurk, who is trying to recover the stolen jewelry and find the mastermind, and the jewel thief Mr. Pardew also wind up at the race. In case you think it’s not complicated enough already, there is great uncertainty about the outcome, some of it centered on whether Mr. Happerton, is betting for or against his horse. Mrs. Happerton has her own betting strategy, different from her husband’s. It’s all resolved at the Epsom Derby itself.

Written in a 21st century version of 19th century style, “Derby Day” is great fun. Mr. Taylor does a very good job of keeping tabs on his many characters, and maintaining suspense up until the very end of the race. Many of the villains are satisfyingly punished. If I have one complaint, it’s that Mr. Taylor requires a great many pages to tie up all the subplots. I’m also not certain Mrs. Rebecca Happerton was suitably treated. What do you think? Let us know in the comments.

Brooklyn Bugle Book Club: “The Affairs of Others” by Amy Grace Loyd