Is Filming In Brooklyn Heights ‘Out Of Control’? 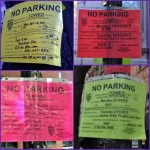 Ask the Mayor’s Office about the inundation of shoots for movies, TV shows and commercials and you’ll get this response: “The industry provides high-quality jobs in an era when low-paying service jobs have become the norm.” According to the Boston Consulting Group, NYC’s film sector is the strongest in history, generating $7.1 billion in 2011, while employing 130,000.

But some residents of brownstone Brooklyn have a different take, saying that they’re paying the price for the boom. According to a story in The Brooklyn Daily Eagle, with “the streets of historic Brooklyn Heights clogged with film trucks on a regular basis, local businesses and residents are fuming.”

Judy Stanton, Executive Director of the Brooklyn Heights Association, says she’s losing count of the multitude of shoots in the neighborhood. For one, filming of flick “Delivery Man” is taking place at Plymouth Church, the Promenade, Brooklyn Historical Society, Henry Street, Montague Terrace, Remsen Street and Pierrepont: “How many blocks? No answer. I think it’s excessive. More consideration needs to be given to little neighborhoods like this one. Last week, ‘Law and Order’ and a Lottery commercial were shooting at the same time. The Lottery trucks blocked Montague from Court to Henry street. That really did affect merchants.”

Andrea Demetropoulos, who owns Rocco and Jezebel pet shop at 89 Pineapple Walk, has launched a cease-fire petition, and tells the Eagle, “Filming is out of control. Three customers and the UPS guy this morning told me they couldn’t park anywhere. They’re killing the people who live here. This entire neighborhood is only 5 by 13 blocks. There needs to be a moratorium.”

The Brooklyn Eagle counts more than a dozen major films and TV shows being shot locally over the last two weeks: “Delivery Man,” “Smash,” “Law and Order: SVU,” “The Angriest Man in Brooklyn,” “Noah,” “Golden Boy,” “Zero Hour,” “Orange,” “666 Park Avenue,” “Carrie Diaries,” “Person of Interest,” “How to Be a Man,” “Infamous” and “Made in Jersey”—along with a number of commercials, like the New York Lottery spot being filmed on Montague Street. Much more in the Eagle piece here.