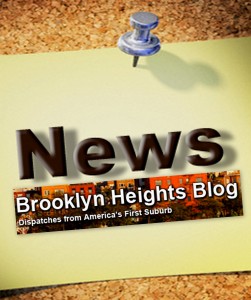 * Gothamist: While we all know electricity was shut off in much of Manhattan south of 39th Street, Brooklyn Heights’ residents noted frequent brownouts and light flickers throughout Monday evening’s storm. Time Warner reports that cable and Internet service is out in parts of Brooklyn Heights, Cobble Hill and Williamsburg. TWC service updates are here.

* A sweet story in Crain’s NY Business: “Even those who could not get to their businesses managed to do business, with help from their customers. Pets Emporium on Montague Street opened with the help of Josh Winter, a customer who has been shopping there for 10 years. The owner, Samih Rum, lives in Bay Ridge and could not make it to work. Winter brought his 7-year-old son, Cheythan, who worked the cash register. “We’ve done a lot of business,” Winter said. “Dog-walkers are always out.”

* Crain’s also notes that all 20 Manhattan & Brooklyn branches of Equinox are keeping normal business hours, 5:30 a.m.-11 p.m. “Calls are pouring in,” says Cynthia Barragan, who works the front desk at the Joralemon Street Equinox in Brooklyn Heights. She spent the night at the gym to open it at 5:30 a.m. “We’re staying open normal business hours and it’s packed.”

* Numerous reports of subway damage, including the effects of the record 13-foot surge of water: “One day after the storm, Hurricane Sandy’s long-term impact on New York’s vital transportation system began to emerge as a major post-storm concern. MTA Chairman Joseph J. Lhota said, ‘The New York City subway system is 108 years old, but it has never faced a disaster as devastating as what we experienced last night.’ All seven subway tunnels under the East River flooded.

* More on subways from CBS 2: MTA has shut down power to subway tunnels that run under the East River between Manhattan to Brooklyn, however, water infiltrated tunnels under the East River. MTA officials say salt water could corrode switches and signals and force replacement of hundreds of pieces of equipment before service is restored. “It could be as few as 14 hours and as much as four days before all the water is even pumped out.”

* The Daily Beast: “Bicyclists and runners climbed over police barricades and ignored ‘park closed’ signs in Brooklyn Bridge Park to continue their usual workouts as wind and rain pushed them back. Young parents wheeled strollers to the Brooklyn Heights Promenade to storm-watch with their toddlers. Boredom seemed to be a bigger fear than power outages or flying debris among the residents of brownstone Brooklyn.”

* Michael Correra, owner of Michael Towne Wine and Spirits on Clark & Henry, told The Daily Beast: We’ve been very, very busy. Everyone has nowhere to go and nothing to do, so they just eat and drink.”

Tuesday: Brooklyn Heights Promenade Is The Place To Be