National Guard Drops In On DUMBO 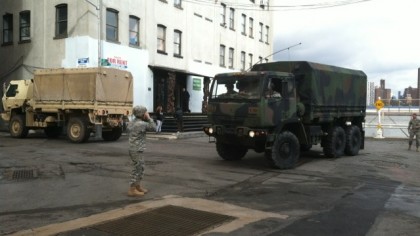 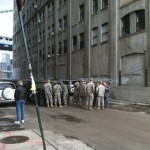 neighborhoods hardest hit by Hurricane Sandy, the troops touched down in DUMBO.

Owen Hughes provided BHB with these stirring pics, telling us: “There’s a building on the corner of Jay Street and John Street that houses Northrop Grumann, the defense contractor. This morning about 10 a.m. the National Guard shows up to remove a lot of equipment from the building and takes off again.” More pics and Markowitz’s full statement below. 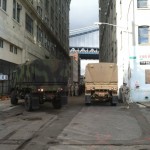 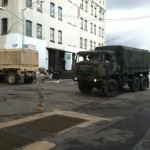 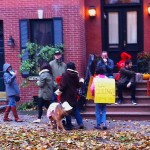 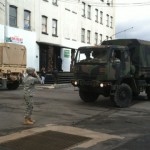 MARTY MARKOWITZ: “Let me start by saying that our elected officials—from President Obama, Governor Cuomo and Mayor Bloomberg to our Brooklyn Congressional and legislative delegations and City Council, with particular thanks to Senator Schumer—have done an admirable job under very trying conditions, and we especially appreciate President Obama’s commitment to New York before, during and after the storm.

Governor Cuomo also acted quickly by activating the National Guard prior to the storm, and I urge him to allocate as many troops as possible to Brooklyn—troops from New York or any other states that can spare them. During my tours of the hardest hit Brooklyn neighborhoods yesterday and again today, it was apparent that the devastation is so widespread and overwhelming that it’s in the best interest of all of our residents for a more significant National Guard presence to supplement the great work being done by our brave—but overwhelmed—first responders, including our amazing NYPD and FDNY.

In addition to flooding, power outages, lack of utilities, sanitation and water issues, and no transportation in neighborhoods such as Coney Island, Sea Gate, Brighton Beach, Manhattan Beach, Gerritsen Beach, Mill Basin, Sheepshead Bay, DUMBO, Red Hook and others, there have been unfortunate incidents of looting in some locations. All of our resources have been stretched to the limit, but in the name of public safety we need to send more National Guard personnel into Coney Island, Manhattan Beach , Gerritsen Beach, Red Hook and any other locations the governor deems appropriate.

After my survey of the affected areas, I also reached out to the American Red Cross and the appropriate city agencies to ask that more help be brought in, particularly water—which is in very short supply right now—sanitation, portable electricity and possibly another shelter in Gerritsen Beach.

My office continues to monitor the recovery effort, and we urge Brooklynites to contact our Community Service Center at 718-802-3777 with any non-emergency issues, and follow us at Facebook (www.facebook.com/martymarkowitz) and Twitter (@MartyMarkowitz) for the very latest information.