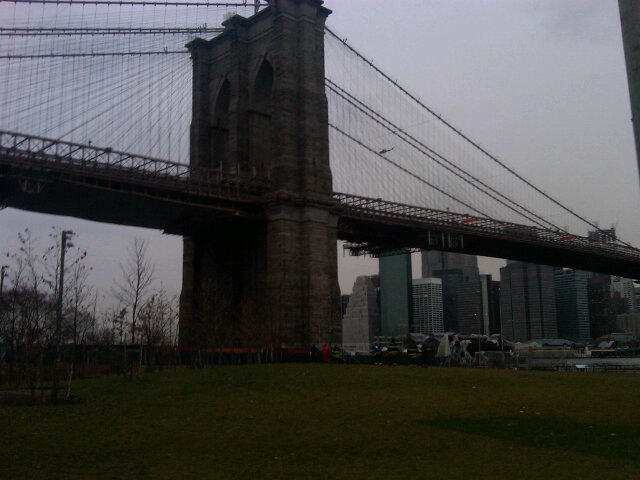 The helicopters hovering above Brooklyn Heights this morning signaled that something out of the ordinary was happening nearby. As many Brooklynites tweeted and news sources reported, traffic on the Manhattan bound side of the Brooklyn Bridge was halted due to a police action.

NY Post: The 19-year-old was threatening to jump from the Brooklyn-bound roadway around 7:20 a.m. when emergency workers responded to the call, said a spokesman for the FDNY.

All bridge traffic was shut down in both directions to pedestrians and cars, cops said.

The man jumped about 30 minutes later from the Brooklyn side of the bridge and landed in the rear of the River Cafe, police sources said.

I was jogging this morning in Brooklyn Bridge Park and saw someone jump off the top of the Brooklyn Bridge. There were police boats, a helicopter and fire trucks everywhere and a team of first responders was trying to make its way up the cable to reach the person but they couldn’t get there in time. He was on the top of the suspension tower closest to Brooklyn.