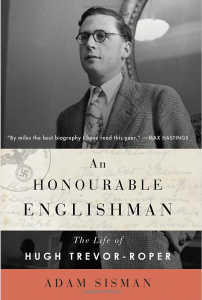 Readers of my vintage who did not major in history will likely remember Hugh Trevor-Roper as the English historian who in 1983 mistakenly authenticated the Hitler Diaries for a Rupert Murdoch-owned Times of London. But, I learned from Adam Sisman’s clear and eminently readable biography, he was much more than that. Trevor-Roper served in the Secret Intelligence Service during the war, became a noted essayist, and was named Regius Professor of History at Oxford at the young age of 43. He became Master of Peterhouse College, Cambridge during the time it (almost last among Cambridge colleges) admitted women. He was a witty commentator, particularly during the early days of television. Trevor-Roper filled many roles during his long life, and Sisman does justice to all of them.

Trevor-Roper* was born in 1914 in the north of England; his father was a doctor. He was a student at Christ Church College, Oxford, emerging with a first-class degree and no clear plan for his life. Casting about for fellowships and graduate studies, he was sidetracked by the Second World War. He wound up working closely with Kim Philby, who, in his day job, was a senior officer in Britain’s counter-intelligence. Though there has been speculation, Sisman appears to conclude that Philby did not try to recruit Trevor-Roper.

At war’s end, Trevor-Roper was asked to investigate the rumors that were circulating about what had happened to Hitler. After reviewing documents and interviewing witnesses Trevor-Roper was able to confirm that Hitler had, in fact, died. The work eventually became the basis for one of Trevor-Roper’s bestselling books, “The Last Days of Hitler.” Trevor-Roper, though trained and intending to become a historian of the 16th and 17th centuries, kept returning, as a scholar and essayist, to the middle of the 20th century.

The mind that Sisman describes was protean, energetic, and interested in many things. “No one doubted that he had a brilliant mind; the breadth of his learning was dazzling; he was a superb writer. Such a combination approached genius.” It was perhaps a fortunate quality, as Trevor-Roper’s life in the center of a close-knit world of government, academia, and high society required a substantial living. This seems to have meant many book reviews and essays, all reasonably well-paying. Quite a few of them involved travel. Trevor-Roper thus became one of the public intellectuals of the second half of the twentieth century. His scholarly work was often pushed aside, and Trevor-Roper was criticized for his feeble publication record (feeble for so prominent an academic). With the assistance of a former student, several more works have been published posthumously. Perhaps the output was not so limited after all.

It is apparent from Sisman’s book that Trevor-Roper was an excellent teacher. He was open-minded and, seems to have balanced being both supportive and demanding of his students. Though many of them may have wound up on opposite sides of academic, religious, or college controversies (and Trevor-Roper evidently enjoyed the fray), the friendships continued for many years.

This biography tells a fascinating story of a life well lived. Do you agree? Let us know in the comments. Have a book you want me to know about? Email me at asbowie@gmail.com. I also blog about metrics here.

* A note on his name: Hugh Trevor-Roper insisted on the double-barrelled surname. In 1979 he was awarded a life peerage and chose the name Lord Dacre. Sisman calls him “Hugh” throughout the book. I can’t do that, so will use Trevor-Roper.

Nets’ Kris Humphries Throws Down in Boston, Gets Ejected [VIDEO]