Brokelyn spotted a sign that the NY Knicks/Brooklyn Nets rivalry is heating up inside the Barclay’s Center subway stop. The budget-minded blog snapped a photo of a “Knicklyn” sticker, a play on the Nets logo featuring Knicks colors that was affixed by someone (marketing guy, crazed fan?) to the station wall.

Brokelyn: Somebody alert Marty Markowitz! Some enterprising trickster has struck a blow for Knickerbocker supremacy with the above “Knicklyn” sticker. Not only is this an attempt to put a Knick foothold back in Kings County, but they were even able to slap it in the Barclays Center subway stop. Who are you, mysterious sticker bandit, and where else have you tagged up in an attempt to take back the borough for basketball fans with taste?

For folks using the power of the Google, they’ll know it’s to plug a dude’s Twitter feed and Facebook page.

And of course he’s got some merch to pimp out: 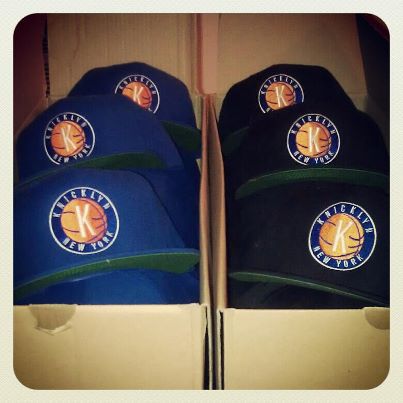