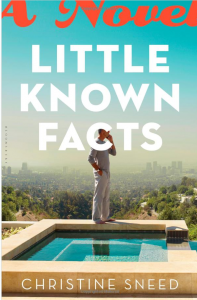 Triangles are stable structures – except when people form them. Shifting alliances mean shifting loyalties, and one’s interpersonal skills must be ready and acute in order to keep up. How many best friend pairs can you think of who were disrupted by a third person? The stakes are even higher when it’s a love triangle. And as Edith Wharton showed us a nearly century ago in “The Mother’s Recompense,” fireworks cannot be far away when the triangles involve multiple generations in a family.

In Christine Sneed’s novel “Little Known Facts” Renn Ivins, movie star, is making a movie in post-Katrina New Orleans when his assistant is called away. Renn summons his 20-something son Billy from LA to fill in. Billy, who lives comfortably off his trust fund but is otherwise a bit lost, does not take well to being at his father’s beck and call. Yet despite having left his girlfriend Danielle back in LA, Billy is happy to be in the company of Elise, one of leads in the film. She’s about his age, talented, driven, and beautiful. She’s also aware of everything that Renn can do for her career.

Back in LA Billy’s sister Anna, a medical student, has some troubles of her own, including an affair with one of the attending physicians, who happens to be married. And then there are Renn’s two ex-wives, Billy and Anna’s mother Lucy, and Melinda, a caterer, who succeeded her. When the movie is done, Renn and Elise return to LA. Elise might reciprocate Billy’s feelings for her, and Renn occasionally feels more strongly about his son’s girlfriend than might be appropriate. It should be clear by now that Renn, however unfortunately for those around him, finds the triangle very comfortable.

Sneed tells her story in only 11 chapters, each written from a different point of view – Billy’s, Danielle’s, Lucy’s. One or two are in the first person, a couple in the third. Melinda’s chapter consists of notes for her memoir – the one about her life with Renn. Far from confusing the reader, Sneed manipulates the points of view effectively, moving the story along and deepening our understanding of each character’s actions. The fact that Anna and her mother are doctors, and several chapters are built around them, helps keep the novel grounded. “Little Known Facts” is a supple story of modern love, aging, and what it means to seek happiness, set around the edges of the movie industry. Perhaps surprisingly, given the rarefied location, Sneed brings her book to a realistic and satisfying ending.