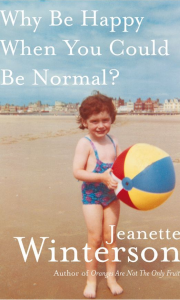 It’s clear from Jeannette Winterson’s memoir of her childhood that Winterson could not predict what she was going to find when she came home after school each day. Sometimes she was fed and housed; other times she was locked in the coal cellar. More than once she spent the night on the stoop, locked out. Winterson was adopted as an infant and she was an only child. It’s evident to the reader that she was eventually emotionally abandoned and functionally neglected by her emotionally unstable adoptive parents. She captures the emotional distance by almost always referring to her adoptive mother as “Mrs. Winterson.” Mrs. Winterson was working class and a member of a Pentecostal church; somewhere along the way, Winterson believes, Mrs. Winterson gave up sex, along with most other pleasures in this world. Winterson’s father was there but seems to have been dominated by his wife. There’s a lot of disturbing behavior described here.

Writing now, looking back, Winterson understands that the lost love of two sets of parents cost her the ability to love. And that in turn acted as a magnifier, turning all stumbling blocks into intractable problems. But somehow Winterson found her way to safety. Physically, the first of those places was her local public library. Winterson read – all books were forbidden in the house – starting with prose, working her way though what the Accrington Public Library considered English Literature, in alphabetical order. Eventually she found her way to poetry. Still later she discovered the writers, many of them female, who were not to be found on that shelf.

Winterson is too good a writer to say it straight out, but it was in the library that she first found the order missing in her life. And it’s where she first found out about the world, beyond what she had learned reading English Literature.

‘Whenever I am troubled,’ said the librarian, ‘I think about the Dewey decimal system.’

‘Then what happens?’ asked the junior [librarian], rather overawed.

‘Then I understand that trouble is just something that has been filed in the wrong place. That is what Jung was explaining of course — as the chaos of our unconscious contents strive to find their rightful place in the index of consciousness.”

The junior was silent.

‘That is not for now,’ said the librarian. ‘And in any case not English Literature A-Z.’

This conversation occurred shortly after one of her teachers, discovering that Winterson is living in a car, gives her a room. And a front-door key. From that unlikley spot Winterson found her way forward: through Oxford, to a writing career, and living a life with love – tentative, hesitant, frightening but real – as part of it. It’s by no means an easy story to read, and there is no simple happy ending, but it is a story as full of humor and sadness and hope as life itself can be.

Jeannette WintersonWhy Be Happy When You Could Be Normal?