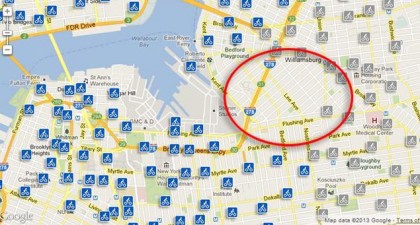 In case you missed it, there are other Brooklynites besides a few (gasp!) NIMBY’s in Brooklyn Heights and other brownstone neighborhoods who are not only against Citi Bike Share (which launches this Monday) but have managed to keep the kiosks out of their neighborhood completely. Bike foes meet your new friends in the “Black Hat Hole”:

NYDN: CitiBike launches Monday with dozens of rental kiosks dotting the landscape throughout the gentrified sections of Williamsburg, Brooklyn Heights and Clinton Hill — but nary a single location in the part of South Williamsburg dominated by Hasidic Jews, who have opposed at every turn the Bloomberg Administration’s efforts to increase cycling.
“They put the racks where they are going to be used,” said Community Board 1 member Simon Weiser, who hashed out kiosk locations with the Department of Transportation. “Look at the Hasidic community. No one rides a bike here.”
It’s not just low ridership that created the so-called “black hat black hole” in the bike share plan, but outright hostility to cyclists.

Hasidic spokesperson Isaac Abraham adds that if bike share kiosks are every placed too close to their neighborhood, “We will put baby carriages there. We will make a baby carriage lane.”

Episode 54: LIVE with Norm Lewis and The Bitchy Waiter!