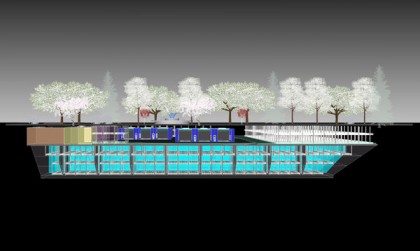 Downtown Brooklyn will have a park to rival Manhattan’s Bryant Park and a high tech underground parking garage will help finance its construction. The New York Times reports that the city is planning to have Willoughby Square opened in 2016.

NYT: The square will span more than an acre on Willoughby Street, a half-block from the Fulton Street mall, with manicured lawns, walkways and gardens, as well as a site to commemorate the abolitionist movement. Below it, the garage will house about 700 cars at any given time, relying on a system of computers rather than garage attendants. It will be the largest automated parking facility in North America.

“This will be a marquee public space,” said Tucker Reed, the president of the Downtown Brooklyn Partnership, a nonprofit local development corporation that will oversee the park’s maintenance. “From the waterfront to the Barclays Center is the core of the 21st century downtown, and to have a public amenity like this right in the middle ties everything together.”

The square has been in the works for nearly a decade, one piece of the 2004 rezoning of downtown Brooklyn. In that time, the city has spent about $40 million on the project for land acquisition and design work and to relocate families and businesses. But Willoughby Square faltered during the economic downturn, with funding cuts and an inability to find a developer.