When his city hummed with radio waves, autumn colored incandescence heating up bakery brown Bakelite, He lived to be lit by the stars of the golden radio city, He lived to find relics in the smoky shade of the old Rialtos. 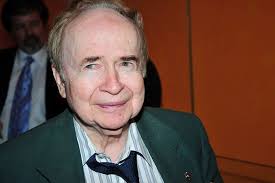 He lived to recall the pre-atomic radioactive shadow of Jolson.

Baby faced in Ballrooms actual and imagined, he had been bitten and beamed at by Banjo Eyes and found his one true church:
Wintergardens where the sacrament was the croon and cry of immigrant America, slippery with Yiddish and leaping with long Italian syllables.

And this was his world, the world created by Jews and minstrels and men of gossip and kings of jazz. On shellac and magic Philco, they were more perfect to the heart than sloppy reality. Life in Newsprint was always better than the newsprint-colored world, and what truth, sepia sad, could compete with the cartoon curve of a Dagmar’s hip?

When the winter-white bathtub-colored sky above his city hummed with terrestrial television waves (and the bunny ears bent to catch them), the pictures from the Motorola fluttered and hissed and he knew: there was no love, no laughter, no tears greater nor more authentic than those we would find when persistence of vision fooled our eyes and made us think the flicker was real.

When his city was full of Robert Moses modern, and the Zenith was tube-heated and so sexy-warm to the touch, and in the TV Guide there was a big C next to the talk shows and summertime fun hours; when the children sat Indian-style in Great Neck dens and overheated Chinatown flats and Grand Concourse kitchens and Captain Jack taught us, all of us equal in his eyes whether we be belly-full or belly-empty, about Hal Roach and Moe Howard.

And behind a desk and a cool, Canada Dry he reminded us, like a Buddha, that everything old was alive in the new; and that Tony Pastor knew Weber & Fields and Weber & Fields knew Lillian Russell and Lillian Russell knew Ziegfeld and Ziegfeld knew Fanny Brice and it went on and on and eternally returned to the beginning and the middle and it could not be more beautiful.

When his city hummed with the slap and jaw of the three Card Monte men in a Times Square shattered and burst and smelling of ammonia and weed, everything yellow like old Scratch’s stucco and the vials crunching crisply underneath hurried feet, he insisted we make time for King Vidor and Johnny Ray and a self published author from the Tuckahoe, and it could not be more beautiful.

I looked through a window in his building once (true), a building full of Bialystocks and tragic hopefuls and hope-nots huddled by dairy-creamer creased coffee machines, and I squinted through wire’d windows, dark with soot at any time of the day, out to the Deuceland below; and if you looked through half-closed/half-happy eyes you could see his city, as he saw it, clocks clicked back and El Morocco black and white, a pigeon-colored world turned at dusk to Roxy Rainbow light fogged by camel smoke rings and a Canadian Club just within reach.

I looked into his eyes once, true, and saw Phil Silvers and Cantor and even sweet Veronica Lake in the shark’s teeth tick of the sassy iris.  Pass me your world, dear friend of so many nights, of every age of my life; give me your century, your hungry, sassy Jews, your prat-falling Irish, your Midwestern Cleopatra’s and Neopatras curved of plenty, your crooners, your jugglers, your tin pan beggars and boastful losers, your soon to be’s and once weres; give me your century, the last century, when the arc lights were high and the overture started at 8:05, sing me the song of your century, give me the paint with which you touched up tense reality and made it tender and alive with song and silent film.

And he is the last of this world, and I love him so.

And to love him without irony is to love the hope felt when you were a child and you lost a breath when the blue lights caught the star on stage.

Tell The Bartender Episode 7: I Didn’t Know I Was Nugent