Without a doubt, one of my favorite television channels is NYC Drive.  It features only one program, continuous but ever-changing: an endlessly compelling movie about the City of New York, told via static aerial views of the highways, bridges, parkways, and rivers that disfigure and delineate the great town.

24 hours a day, 7 days a week the NYC Drive Channel (Channel 72 on Time Warner cable) cycles through about two dozen live traffic cams, posted at various places in the five boroughs.  The shots are all taken from a reasonable distance, allowing you to take in a healthy slice of the landscape (along with the roads and the anonymous automobiles moving rapidly or flaccidly along them). 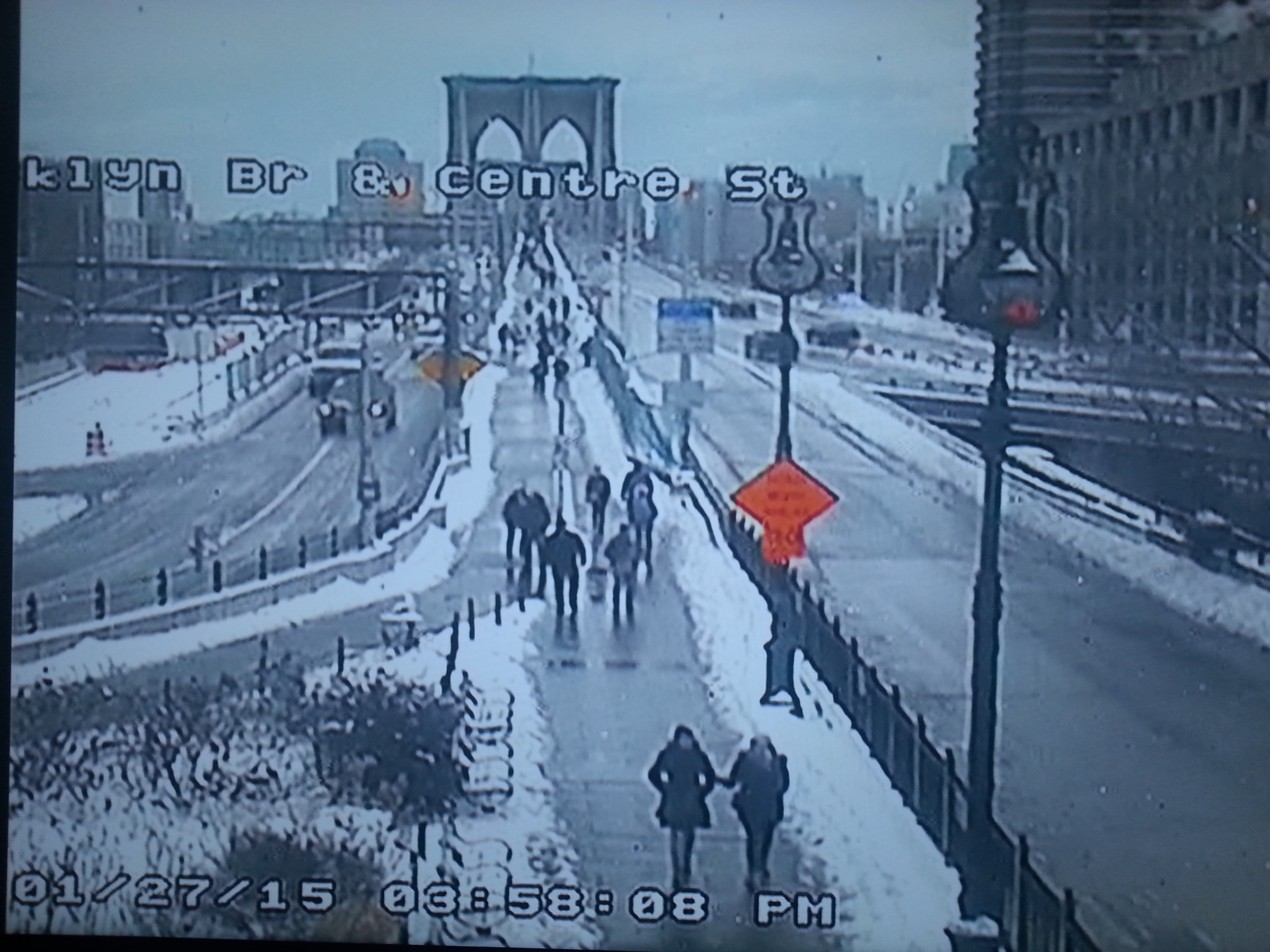 Seen for a few moments or seen for a few hours (believe it or not, it invites continuous viewing), NYC Drive is luxurious, elegant, sublime, moving, revealing and hypnotic, yet strangely frantic (the shifting of the images seems to defy a clock, and no image is ever the same twice, even if the camera is perfectly still); it is like the great New York movie Wim Wenders never made, a perfect, objectively dry yet subjectively wet conjuring of a city whose evocative power is so extreme it defies the almost brutal, robotic stillness of the cameras.

The images – each identified in some kind of effective shorthand (LIE & Van Wyk,  FDR and 115h, Maj Deegan & 167,  Bowery & Canal, QB Bridge & York, and so on) each have a compelling charm, and each (with the single exception of Times Square) feature virtually no human figures (the Times Square camera is also returned to like a refrain, far more frequently than other cameras, and it is held on screen far longer, almost as an identifying tag).  Every one of the many cameras also broadcasts with (sometimes dramatic) differences of clarity and tone, and this further adds to the effect of the piece when seen as a whole, since there is just enough similarity to create a hypnotic effect, but more than enough difference between images to keep one alert.

During the day, these strange, sometimes faded images, scarred oddly and intermittently by color (the Brooklyn Bridge shot would appear to be entirely black and white, except for the blurt of orange in a yield sign), seem timeless, having both the slightly herky-jerky quality of an old 8MM film and the majestic sweep of an early Technicolor movie  whose colors have faded into something strange, old and new; the tiny rumors of color also recall the chips of paint found on old Roman and Greek statues, something to be investigated further by experts, or filled in by people with either experience or imagination.

This is New York as palimpsest and blank page, both a history to be written over and a story to be filled in.  The New York City of NYC Drive is lonely, surreal, colors muted or mystical, saturated and sensational; it is both sooty and heavenly, toy-like and almost Soviet-era brutal.  This city is ready to be filled with souls and dreams and transients and travelers, it is the definitive image of New York City as tabula rasa.

Watch the damn thing (especially if you like the glacial, gorgeous films of Wenders or Tarkovsky). For me, NYC Drive is the story of a place, a great place, ripe for imagination and self-fiction (for largely gone are the questions of commerce, gentrification, phony Elmos and real landlords);  it is all I ever wanted the city to be:  a canvas for the possible, a treasure box to hold the weight of the past, a surface and safe for  all the dreams of glory and mammon and even repose the city is built on.  Staring at the endless but constantly changing pictures of NYC Drive, I realize these images recall my very earliest hopeful impressions of the city: the muted, promising, swelling skylines and speeding headlights of the Million Dollar Movie intro, and the quick flickers of the city as the effervescent, unpredictable, and romantic place you would see in the openings of newscasts, sitcoms, or sporting events.

I only wish there was music – perhaps the spacious,deeply emotional instrumentals of Roedelius or Satie, or maybe the motorik-motor-ticking pulse of Neu!, Kraftwerk or the Feelies; or maybe some mix of cool, candle-lit instrumentals by Air or Dave Brubeck; and, of course, the sinuous, gently satanic majesty of “Rhapsody in Blue.”  But the silence works, too, because your heart fills the quiet in with memories, hopes, and even fragments of just the right music.

NYC Drive is a very slowly pulsing, ever-moving, shiver-happy and shiver-sad movie loaded with the images of childhood dreams and distant hopes; and the glorious nighttime feed is bound to remind you of that one perfect night when the Checker carrying you and your date passed through a cloudy stack of man-hole steam, and the Subway Inn neon broke bright and wet on the windshield. 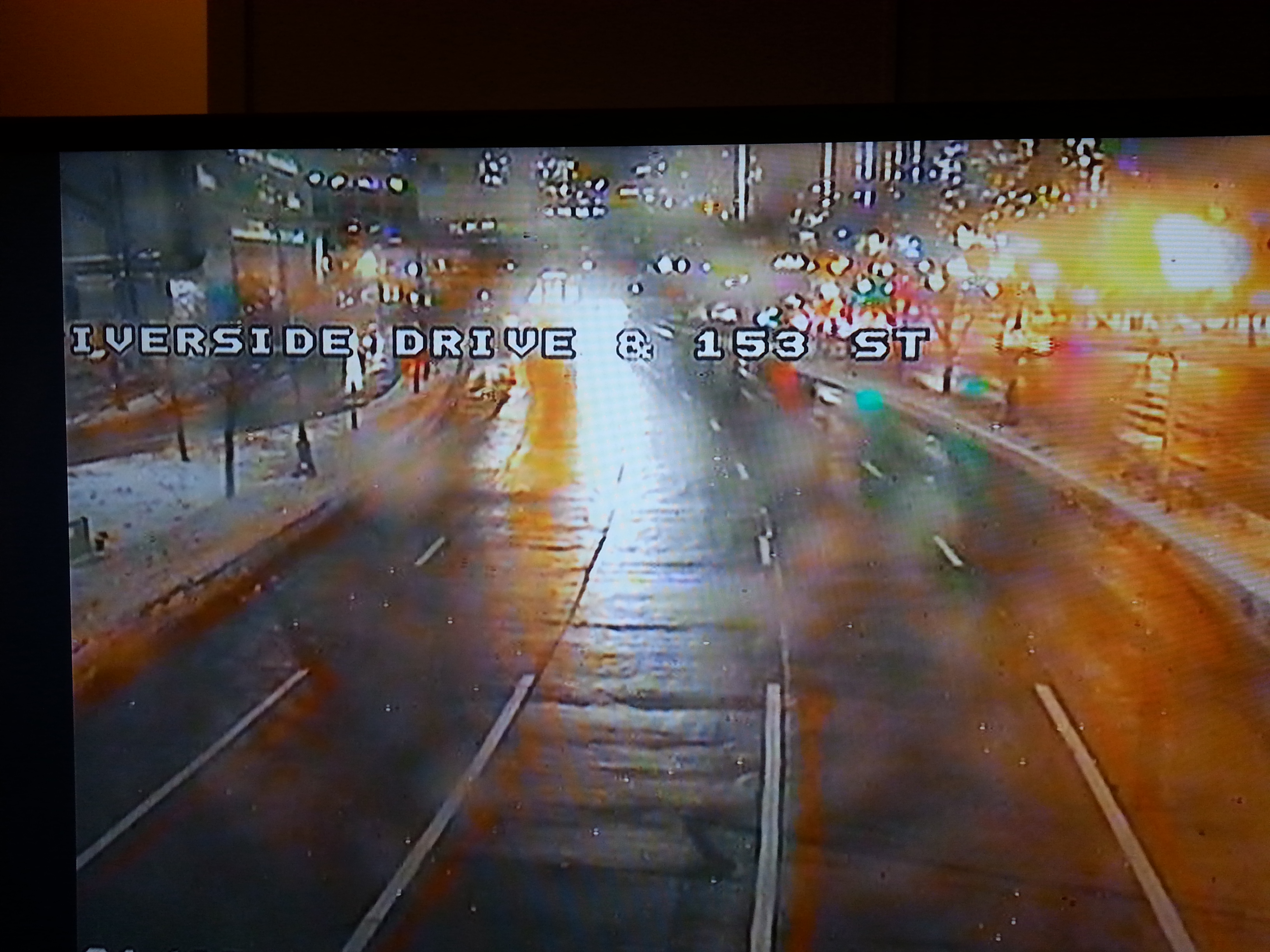 Because at night is when the feed really comes alive.  The Manhattan-based shots dissolve into vivid, almost lurid golds, blues, whites, and oranges. Aspects of the images seem to become clearer with the night, whereas other factors dissolve into beautiful blots of almost-churchlike bronze and gold; and in shots where the rivers creep in, the water shimmers with 800 shattered split-moons.

Outside of the Manhattan cams, the more color-less night images look barely defined but compelling and identifiable, like fantastic pin-drawings; or they wobble like kinescopes; or they are cool and full of graphite-grays and bursts of white, like old spy images of Eastern Europe (at times oddly splashed with a spot of color on the horizon, like a distant Cathedral seen from a train window at night).

I really can’t say enough about the magic of watching NYC Drive, either as an interstitial curiosity to be clicked to during commercials of another show, or to be watched at length, with the attention you would give to a great art film.  I don’t know whether the enchantment of NYC Drive is intentional or accidental, but the effect is real; it is the story of the city and your hopes, fast, static, full of gravity, full of lead, hazy and precise, colored bright and modern and ancient pencil-gray.

And I have to imagine – it has to be intentional, right, because who is watching the TV to figure out what roads they should avoid?

And perhaps, most importantly, I have actually used the word Palimpsest into a column.