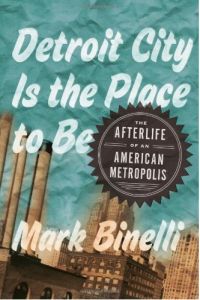 Between its recent declaration of bankruptcy, and the news that the Detroit Institute of Arts may be forced to sell some of its works of art, Detroit has been much in the news lately. That’s before we even think about the melting down of the domestic auto industry and the collapse of the related suppliers. And the enormous changes the last 20 years have brought to the music business. How did Detroit get here? What is happening to the people who remain? What about those fires? Mark Binelli provides answers to these and several other questions in his thoughtful book.

Detroit used to be an alluring place, drawing workers from all over the country with its countless factories – it once was called “The City Where Life is Worth Living” (really). It had a population of nearly 2,000,000 people, skyscrapers, high employment, and even, in the Detroit Institute of Arts, one of the original castings of Rodin’s sculpture The Thinker. Over the last 50 years Detroit has declined: its population has plummeted to approximately 713,000, with 90,000 buildings abandoned. The school system is among the worst in the country, and its crime rates among the highest. “Along with empty skyscrapers and block-long factories fallen into ruin, entire residential streets, once densely populated, resembled fields in rural Arkansas . . . A coyote had just been spotted near downtown.” So Binelli moved back to Detroit – he grew up just outside the city – to experience “what happens to once-great place after it has been used up and discarded?”

Binelli found more than he expected. He visits a school for pregnant teenagers with a 90 percent graduation rate – and where a college acceptance letter is required for graduation. Besides attending school, students work on a farm located in the urban prairie behind the school, where the football field would be located. Each student tends her own vegetable plot – and most go to college.

But there’s a lot of empty space in Detroit, places that used to be neighborhoods, and no one knows what to do about it. Or, as an urban planner Binelli met put it, most of the urban planning scholarship is about growth. “There’s very little of value at all written about what do you do about decline.” Some lots have been left empty; others are a graveyard of failed urban renewal projects. Quite a few have been made into gardens. Then there are the art projects. Beginning in the mid-2000s Detroit gained a reputation for cool; movies were made and artists produced events there.

Binelli includes a great deal of Detroit history – Harry Houdini makes an important appearance – and an entertaining profile of Coleman Young (who provided a lot of material). Binelli himself eventually moved back to the East Coast to produce the book, but he’s clearly left something behind. And that’s appropriate because, as he points out, Detroit may be more the city of the future than of the past. Do you agree? Let us know in the comments.