Brooklyn Bugle Book Club: “Citizens of London: The Americans Who Stood with Britain in its Darkest, Finest Hour” by Lynne Olson 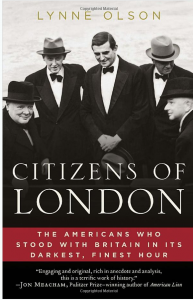 We tend to forget, in the United States, that the Second World War actually began in September 1939, not December 1941. The early years before the US entered the war were disheartening ones for the British, who fought alone against Hitler after Germany’s armies overran most of Europe. Three Americans who spent part or all of those years in London helped make the US into a strong and supportive ally. Edward R. Murrow was the CBS reporter who made dramatic radio broadcasts that ensured Americans understood the extent of the damage to London – and the stiff upper lips that carried Londoners through each day. Averell Harriman arrived in 1941, as administrator of the Lend-Lease program. That same year Gil Winant, former governor of New Hampshire and the first chairman of the Social Security Board, replaced Joseph P. Kennedy as the United States Ambassador to Great Britain. Olson centers her clear-eyed narrative of life in London during the war around these three men.

Winant, who did not live long after the war, is the least known to us today. He was a teacher at St. Paul’s school who had joined the US flying corps during World War I. A master of the evocative detail, Olson says of Winant:

His aviation skills were somewhat shaky . . .while he was “all right” in the air, he needed “the greatest luck” to take off and land. . . Winant also possessed a reckless courage that prompted him to volunteer for observation missions over enemy lines that others considered suicidal . . . Having enlisted as a private, he ended the war as a captain.

Winant entered politics a few years after the war, and, despite poor public speaking skills, was elected governor of New Hampshire three times. Olson describes Winant as reserved and awkward, especially in contrast to Winston Churchill, “the lord of language.” (If you haven’t heard it, you can listen to one example, the “We shall never surrender” speech of June 4,1940 here.) All the same, the Britons found in Winant a kindred spirit, and he never let them down. He was adept at helping Churchill manage a difficult relationship with Franklin Roosevelt dating from their first meeting in 1918 when Churchill snubbed Roosevelt. Winant worked hard to keep the relationship functioning, persuading Churchill to hold back angry telegrams and Roosevelt to send more aid.

Olson doesn’t limit herself to her three main characters. There are many smaller and lively portraits here, of men such as Tommy Hitchcock, who helped ensure that the US developed small fighting planes, and several women around Churchill: Clementine his wife, their daughter Sarah and daughter-in-law Pamela Digby Churchill (later Pamela Harriman). Women were central to the voluntary efforts to relieve Londoners affected by the blitz (the Government was “overwhelmed by the massive homelessness created by German raids; in London alone, 1.4 million people . . . had lost their homes by the spring of 1941″.) The Women’s Voluntary Service, created by Lady Reading, stepped in. Its members helped evacuate children from London, met soldiers evacuated from Dunkirk with sandwiches and tea, helped find housing for European refugees after Hitler’s armies overran continental Europe, and staffed rest centers, hostels, mobile libraries and canteens, and distributed supplies and clothing.

London was a lively place during the war, despite the bombings, full of men and women who were liberated by what Eric Sevareid (he was there as a young reporter) called “the exaltation of danger.” All those young – and even the not so young – played hard; there was a great deal of parties, drink, sex, and poker. The population grew with the build-up to D-Day, and then ended. Olson writes movingly of the British people bringing out food and tea for soldiers on their way to embark, and of convoys stopping in front of houses so a soldier could run in and say a goodbye. Now we would watch the news on TVs and computer; then, stores and movie theaters closed and sports events were cancelled, and people went to church to wait for news.

“Citizens of London” is a marvelous book full of moving and entertaining stories. What’s your favorite anecdote? Let us know in the comments.

Have a book you want me to know about? Email me at asbowie@gmail.com. You can read my metrics blog at asbowie.net.