Brooklyn Bugle Book Club: “The Passage of Power” by Robert A. Caro 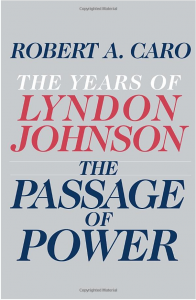 “The Passage of Power” is the fourth volume of Robert Caro’s masterful biography, “The Years of Lyndon Johnson.” Originally projected to be just three volumes, the work seems to keep growing, and that’s for the good. There’s no question that politics junkies will love this book, but even if you’re not, it’s a great book.

First, there’s the history. This book covers the runup to the presidential campaign of 1960, the election, Johnson’s Vice Presidency, the assassination in Dallas, and the first seven weeks of Johnson’s Presidency, from November 22, 1963 through his first State of the Union speech in January, 1964. A lot has been written about the election, and the Kennedy Presidency, not to mention the assassination. This retelling, with up-to-date research and coming from the Johnson viewpoint, adds perspective and a fuller view. To give just one example, Caro vividly describes the beginnings of the bitter feud between Johnson and Bobby Kennedy, and then spends several pages showing how that feud played out on the day John F. Kennedy told Johnson, and the world, that Johnson would be his running mate. It’s an interesting take on the close relationship between the brothers on a day when they did not see eye-to-eye.

You may have read the excerpt from the book in the New Yorker, telling the story, again from Johnson’s perspective, of the events in Texas on the day of the assassination. The book has a fuller and more detailed recounting. Again, one example. Johnson wanted to be sworn in while he was still in Texas, and he wanted a particular federal judge, Sarah Hughes, to swear him in. Why Hughes? Because when Johnson asked that she be nominated to the federal bench Bobby Kennedy turned him down, and Johnson told Hughes the nomination would not go ahead. Johnson was humiliated at this demonstration of the limit to his power. (The nomination went ahead anyway at the request of Sam Rayburn.) Johnson’s choice of Hughes was a subtle, but pointed, statement that things were changing. Immediately.

The last half of the book, and the reason, I’m guessing, that Caro turned his projected final volume into two, is the extraordinary story of the transition. During the three years of the Kennedy Administration, Johnson had sunk into obscurity, to the point where people were making cruel jokes about him, sometimes within his hearing. So his ability to rise to the occasion after the assassination, which he did, magnificently, came as a surprise. Caro provides a detailed chronology of the first five days, showing Johnson meeting with grieving Kennedy staffers and asking them to stay on and reaching out to Congressional leaders. It’s an extraordinary portrait of a man under great stress taking control.

In the final section, Caro continues with the next several weeks as Johnson shaped his Presidency. Legislation that had been stuck started to move through Congress. A budget was finished and passed. Most important of all, the 1964 Civil Rights bill became possible. And while all that was going on, Johnson waged, and won, an extraordinary public relations effort intended to rally the press and the country to his side as he took over while positioning himself for the 1964 presidential election, less than a year away.

Don’t worry if you haven’t read the earlier books – though they are very much worth reading. Caro borrows, or adapts, episodes from them where necessary, and this book stands on its own in any case. Some people find Caro’s style repetitive, but I find it rhythmical and helpful. What he has to relate is complex, and Caro relates events slowly, adding more memorable detail with every iteration.

I came away from this book with a heightened estimation of the political skills of Lyndon Johnson, and a lowering of my esteem for Bobby Kennedy. Do you agree? Let us know in the comments.

Saturday In The Park: Free To Be