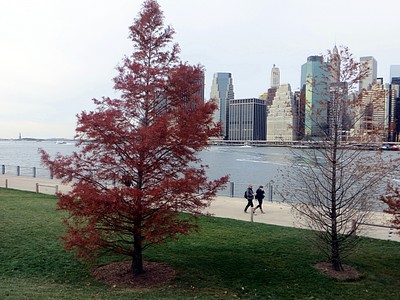 Brooklyn Bridge Park announced today that it has been named winner of the 2014 National Planning Excellence Award for Urban Design by the American Planning Association. The APA’s statement announcing the award says:

Brooklyn Bridge Park has successfully integrated the Brooklyn waterfront into the fabric of the neighborhood by creating urban nodes at the park’s main entrances and improving access with a new pedestrian bridge. The park was planned with several goals guiding its development, including returning the waterfront edge to the public; creating a multi-use civic space; and connecting with the adjacent neighborhoods.

The statement goes on to say that the Park “has had a transformative impact on the community.”

Since 2009, we have watched a stretch of abandoned piers and uplands below Brooklyn Heights become a world-class park. Visitors can now walk a shade-dappled path through native plants, picnic on a grass lawn with a view of the Brooklyn Bridge, and take in a performance or lecture sitting on the granite steps facing lower Manhattan.

The Birth of Hardcore Punk In New York City (Part 2)