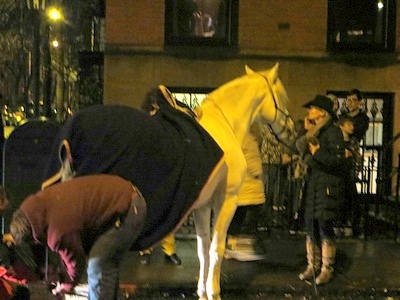 Last February the production for Winter’s Tale, the movie based upon Mark Helprin’s 1983 novel and starring Colin Farrell, basically shut down Brooklyn Heights. But it sure was exciting to see fake snow spread along Hicks Street and a majestic white horse prepping its scene on Joralemon Street. Nothing beats Hollywood Magic, right?

So, were the NO Parking and Tow Away zones and the late night shoots worth it? Well faster than you can say “Remember Me“, the bad reviews have piled up.

The New York Times A.O. Scott says the flick turned out to be, “a lumbering white elephant rather than the flying white horse that is the novel’s magical mascot.”

Winter's Tale filming shut down half the streets in #BrooklynHeights for weeks. Good to see it was worth it! http://t.co/XW68n3ansx

Sci-Fi website io9 piles on saying, “every single scene is treated as the most heart-rending emotional heartgasm ever, to the point where you feel as though the movie is beating you across the head and shoulders with a pillowcase stuffed with rocks.”

Richard Roeper’s reveiw in the Chicago Sun Times is headlined “Winter’s Tale: An Old Fashioned Train Wreck Of A Film.”

The Onion’s AV Club says, “A film this awkwardly sappy comes only once in a blue moon.”

And the ultimate barometer of movie quality, Rotten Tomatoes, reports that only 15% of critics and 52% of audience members liked the film.

So, does it matter if a movie that shuts down that neighborhood is good or bad? Do the benefits (?!) of having films shoot here out weigh quality? Comment below!