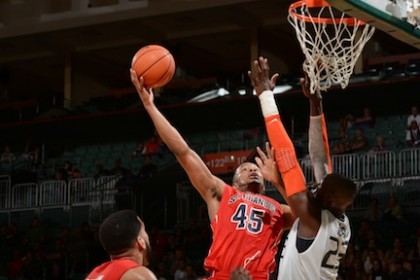 On Friday, Mark Morales of the Daily News reported

One of the three players was identified as Terrier freshman Wayne Martin, who was accused of unwanted sexual advances. The charges against Martin, who played at South Shore High School and was not enrolled at St. Francis in 2012, were subsequently dropped.

According to George Arzt of George Arzt Communications, a spokesman designated by St. Francis to respond to media inquiries, the college will have no statement on this matter beyond Tuesday’s announcement from President Brendan J. Dugan, in which he acknowledged the suspension of five students “for allegedly violating the St. Francis College Code of Conduct.”

In a telephone interview on Friday, Arzt stated that because the charges against Martin were dropped, he will be available to play on Sunday, when St. Francis plays LIU Brooklyn in the annual Battle of Brooklyn contest that will be held at Barclays Center.

Arzt stated that White, who has been charged with assault and criminal mischief, will not be available for Sunday’s game. Furthermore, Arzt admitted that he was not certain of the status of suspended players Brent Jones and P.J. Santavenere, both juniors. It is possible that a decision regarding their availability will be made prior to tip-off.

According to Arzt, the fifth St. Francis student who was suspended was also on the Terriers’ squad, meaning that the rash of suspensions impacted more than one-third of the program’s players. That student, whose name has not be released, was suspended for five days but has apparently been reinstated.

For a small Catholic school that prides itself on adhering to precepts handed down from St. Francis of Assisi, accusations regarding arrests and sexual misconduct are both entirely out of character and a devastating distraction to what promised to be one of the more successful campaigns in recent memory.

“While the investigation is still going on, I’m not able to comment,” said Terrier Athletic Director Irma Garcia, who has been in charge of St. Francis Athletics since 2007. “I can’t say anything that could affect the investigation. The administration at St. Francis is committed to protect the rights and privacy of all the people involved.”