I Turned Down A Date With Morrissey

There are some artists who announce themselves so forcefully, so brightly, with such power and grace; at these moments, you shiver a little bit, you know something special is going on, you sense this artist may be with you for a long time, and you frequently discern all this before the vocals even come in.

The Smith’s first 45, “Hand in Glove,” had this effect on me (and I gather many others).  A rich, ringing arpeggio, just very slightly off kilter, skipped off the turntable and out of the speakers, and you were sold even before the vocals came in; and then they came in: underlining the shock of the newly familiar and the familiarly new, pathetic and adamant at the same time, charming and mysterious, a bizarre combination of whining and sexy, it felt a little like some twisted and precise singer both of the ‘50s and the ‘80s, maybe Marc Almond if he actually was Gene Pitney, maybe Brian Wilson if he was Lance Loud, deeply confessional but verging on, well, silly; and the music had some familiar references, most notably Orange Juice and the ratchety-“What Goes On” sound so typical of the Postcard bands, but there was a poise and precision and swing here that Orange Juice always sorely lacked.  I also sensed, somewhat instantly, that this band were an appropriate book-end to R.E.M. who had tsunami’d into our consciousness about a year and a half earlier; both had common roots in the Velvets and the coffee-fueled sensitivities of poetry and Patti, though curiously the influence that R.E.M. took from the dB’s and Athens art-rock and the independent influence that the Smiths took from Postcard and Manchester post-punk bought both bands to a very similar place via fairly different avenues (I should write about that at greater length in the future!).

I played “Hand In Glove” over and over again, then went out and bought the 12”-version so I could distinguish the glowing clarity of this extraordinary object in higher depth.  Of course, I also combed the British music press for any more information about this extraordinary new band.

The Smiths came over to play Danceteria in New York City on New Years’ Eve 1983/’84.  This was a time when some very creative and wonderful promoters, who were true music fans, would regularly bring the ‘hot’ or ‘about-to-be-hot’ new British bands over to New York City for just a show or two.  Now, the people most responsible for this were promoters/cultural artists Ruth Polsky and Jim Fouratt, two of truly the most important people in the entire story of alternative music in New York City; to be frank, I don’t recall which one of these incredible people, both sweet and brilliant, was responsible for bringing the Smiths over.  I could certainly clear this confusion up in one email, but both of these people are so dear to my own personal history, and so absolutely central to my experience as a music lover in the late ‘70s/early-mid 1980s, that I somehow want to give credit to both of them, and that’s where I want to leave it.  However, in the back of my head, I think it was probably Jim.

Right around New Years, I was in my grim and almost Scorcesian apartment on Eldridge Street when I got a phone call.  I imagine the phone being blue, though perhaps it was beige.  As I picked up the phone, I recall I was looking out the window, a filthy, mottled window that made the already gutter-water tepid view looking East down Houston Street appear even grayer, if that’s was possible; the world through that window, especially on a winter day, was colored school locker room dead-eye blue, a concrete city underneath a newsprint-colored sky.

On the other end of the line was a fellow who ran Rough Trade, the Smith’s label.

I am not going to disclose his name (though I’m not entirely sure why).  By late 1983, I had been a journalist for nearly five years, and a fairly prominent one for about three years.  I had dealt with this fellow before, always cordially.

At the time I picked up the phone call, I was at an odd and particularly dark period in my life.  Literally just days earlier I had returned from my first-ever tour as a musician, a four-week jaunt with the Glenn Branca Ensemble.  It was a riotously brilliant time on stage and off; to sit in the midst of Glenn’s incredible, original, seismic music was an experience as a participant and as a listener that cannot be adequately described, nor equaled.  It was a beautiful earthquake every night, as the floors shook and the bass lifted you off the ground, your ears hearing unimaginable saints and sinners and dog whistles and 747s.  Offstage, well, I was 21 and I had a freaking great time.  Returning back to Eldridge Street, and a virtually Dickensian shabby room that my great friend Jack Rabid had made available to me at a ridiculously low cost, was an enormous, deadening let-down.

It was late December, 1983, I was sad, missing the road and general and specific romances associated with it, and the head of Rough Trade was on the phone.

“Now, listen, Tim,” he who shall not be named said.  “You know the Smiths are in town, and all the boys are going out and having fun, but Morrissey won’t leave the room.  I really think the two of you would get along.  Why don’t you pop up to the Iroquois and keep him company?”

This request, in and of itself, was not so very odd; on any number of occasions before I had been summoned to hang out with visiting British musicians because a manager, publicist, or mutual friend thought we might enjoy each other.  Roddy Frame, Billy Idol, Jim Kerr from Simple Minds, in just the last year prior to this incident, I had been called to one hotel or another – usually the Iroquois or the Gramercy Park – just to have a drink, go for a walk, or see a movie.

But this felt, well, different.  There was a tone in Mr. Rough Trade’s voice, or maybe I was just reading into it; I also didn’t know this fellow (the Rough Trade guy) all that well, so it seemed odd that he would reach out specifically to me.

It instantly occurred to me that Mr. Rough Trade had called me because he may have heard a rumor that I had been intimately involved with another young, male, artistic, enigmatic lead singer; perhaps he figured that, well, I might be game for another one.  Now is not the place to discuss or dissect why Mr. Rough Trade (a nice guy, by the way, none of this is meant to be critical of him) had these suspicions, or if these suspicions were correct.  Around that time, in fact since landing in New York City four years earlier — I was occasionally asked if I was gay.  When questioned, I would always try to remember a model set by Charlie Chaplin, of all people.  See, at the height of his success in the 1920s, there was (more than) a fair amount of Anti-Semitism around, and a good many people thought Chaplin was Jewish, and usually this was discussed in a somewhat accusing manner. Whenever Chaplin was asked if he was Jewish, he would NEVER deny it — he said that to deny being Jewish was to appease and align with the Anti-Semites, because announcing that you weren’t Jewish was the same as agreeing there was something wrong with it (for the record, Chaplin was not Jewish – his half-brother Sydney, who was his manager and closest companion throughout his life, was Jewish, however, and this is likely where the public confusion started).  So, to a degree, I consciously attempted to model Chaplin’s attitude whenever anyone indicated or inquired if I was gay.

I don’t quite know why – perhaps I felt some small offense regarding the idea that because I may have been involved with one musician I might engage with another – more likely, I was waiting for a phone call from someone I had a thing for — but I politely declined the offer.

(I think it was the latter, by the way.  I specifically remember the object of my affection  was a very erratic caller, in fact if memory serves they didn’t even own a phone, so phone calls were rare and scheduled in advance and involved the local hippie restaurant near where they lived being open and the phone being available.)

Anyone who says they regret nothing in their lives is a fucking liar.

Layne, I’m as sorry as you are.

Finally, did you know that Cap’n Crunch’s full name is Horatio Magellan Crunch?  Seriously.  And now that I know that, for some reason I cannot get out of my head the concept of (the film) Captain Phillips being re-made with Captain H. M. Crunch in the titular role.  Because that would have changed everything.  If those Somali pirates had boarded that goddamn boat and encountered that squat, pop-eyed, Leno-jawed thing, they would have just jumped overboard screaming and rapidly intoning the name of whatever god they worship. No hijack, no violence, end of fucking story, my friend.  That’s a film I want to see. 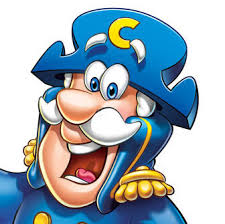 The Unbearable Lightness of Being Vini Reilly