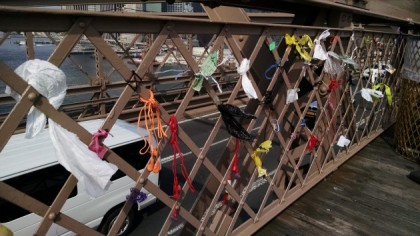 Back in May, the city let it be known to tourists and others inclined to leave “love locks” on the Brooklyn Bridge to cut it out. While the totally ridiculous practice of leaving a gym lock fastened to a public place as a sign of a couple’s devotion has roots going back 100 years, it’s been deemed a nuisance here and other locations around the world.

Just when we thought the world was safe from lovers defacing the Brooklyn Bridge, blogger Jen Jones notice they’ve adopted a new practice:

WYSK: So as I’m reveling in the absence of these “love locks,” a tattered ribbon flapping in the wind catches my eye. Then another and another and another. Next thing you know, I am staring at a long straightaway section of bridge wall that is littered with ragged ribbons, toilet paper, plastic bags, paper receipts, and ear buds that have all been tied on, by hand.
I didn’t think it was possible, but the human desecration of the Brooklyn Bridge had reached a new low… THIS is what tourists have moved on to doing after the city’s lock-down on the locks!
So let me get this straight, you come to visit a world-renowned landmark – one that is often referred to as the “Eighth Wonder of the World,” one that has inspired all forms of art, one that took 14 years to build, one that over 20 people died constructing – and you pay your respects by tying your garbage on to it?
I stood there dumbfounded and continued to walk past the stretch of fluttering refuse. That’s when I saw three guys in orange vests and hard hats. I watched them painstakingly cutting and untying every piece of garbage left “lovingly” behind by legions of disrespectful tourists.

Brooklyn Bugle Book Club: “The City and the City” A Novel by China Miéville