A rather grievous error in the New York Times – yes, yet another one – has set me off AGAIN.

Serge Gainsbourg is one of the more remarkable vocalists and composers of the 20th Century. He is an immediately distinctive singer and picaresque songwriter, the bridge between Sinatra and Nick Cave — as charismatic and rich with the fruit of the pop century as the former, and as rife with the epoch’s twists and social confusion as the latter. Serge is the epitome of every deeply sexy, deeply ugly, brilliantly artistic and profane French or German artiste; his strange, erotic, even gruesome music carries arrogance and vulnerability; and he is, without any doubt, a genius, even if you hate him (love him).

Did I use “picaresque” correctly, New York Times? Perhaps I did, perhaps I didn’t, but it just looks so damn good there, doesn’t it?

Serge’s daughter, Charlotte, is a startling and fearless actress and musician. SHE SPELLS HER LAST NAME GAINSBOURG, LIKE HER BRILLIANT FATHER, NOT GAINSBOROUGH, LIKE THE FUCKING PAINTER.

(These are Charlotte Gainsbourg’s parents.)

OH in case I have to refresh your memory, New York Times (because I understand you may be very, very busy running stories in the Real Estate section about a couple you want us to FEEL SORRY FOR because they had to SETTLE for the 6.75 million dollar condo in Tribeca WITHOUT the fireplace), my grievance refers to the following, from a story in the August 6th’s issue by Vanessa Friedman (who I am sure is a very nice person):

“Still, when it comes to muscle flexing via marketing imagery, perhaps nothing beats Nicolas Ghesquière’s first campaign at Louis Vuitton, which offers up a triptych of big-name photographers (Bruce Weber, Annie Leibovitz, Juergen Teller), each telling a story with one of four models (including the actress Charlotte Gainsborough) that runs as a gallery of images — not just an ad, but an exhibit unto itself.”

Charlotte Gainsbourg (NOTE; GAINSBOURG, GAINSBOURG, GAINSBOURG!) is NOT ONLY the daughter of a famous singer, her mother, Jane Birkin, is one of the fashion icons of the 1960s. Oh DID I MENTION THAT THE FREAKING BIRKIN BAG WAS NAMED AFTER CHARLOTTE GANISBOURG’S MOTHER?!? I presume, since YOU ARE A FLIPPING FASHION REPORTER, you have heard of the Birkin bag…

…but apparently you had NO idea HOW to spell the last name of a famous cult actress who is the daughter of a famous fashion icon and a legendary cult singer; or perhaps, if I may inject a soupcon of charity into the proceedings, you, dear Vanessa, did spell the name properly and it was “corrected” by a drooling, unshaven, L-Train riding, codeine-popping INTERN in an ironic Doobie Brothers t-shirt who THE NEWSPAPER OF FUCKING RECORD TRUSTS TO DO ITS PROOFREADING. 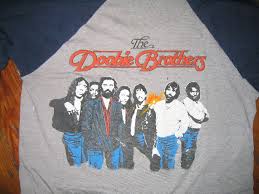 (This is a Doobie Brothers t-shirt, to be worn ironically by someone who pays too much attention to LCD Soundsystem)

Ms. Friedman, I am most certain you are a really nice person, I really do mean that, but someone who writes about fashion in the New York Fucking Bloomberg Sucking Off Times and DOESN’T KNOW HOW TO SPELL CHARLOTTE GAINSBOURG’S LAST NAME SHOULD HAVE TAKEN THEIR FUCKING POLI SCI DEGREE FROM OBERLIN (or was it a semiotics degree from Brown?) AND GONE TO LAW SCHOOL LIKE THEIR MOTHER SUGGESTED.

Seriously, this kind of mistake is an ATROCITY, and it sets of an ANSCHLUSS OF DESPAIR IN MY HEART. Yes, I said an Anschluss of Despair. Which, by the way, would make a good title for a Cradle of Filth song. Are you familiar with Cradle of Filth, Vanessa? No, I didn’t think so. Their song “Temptation” is one of the great musical guilty pleasures of the last ten years.

(This is “Temptation” by Cradle of Filth, and everyone should stop and listen to it and not pretend they are “too cool” to think it’s freaking amazing)

New York Times, please take you collective Timesian head out of the lap of the nearest Russian Billionaire and note the following:

A) A fashion reporter who CAN’T spell Charlotte Gainsbourg’s last name correctly probably SHOULDN’T BE A FASHION REPORTER and instead should have taken the LSATS like her cousin Deborah did, and/or B) If your fucking proofreaders can’t pick up a mistake like that you probably should START PAYING THEM instead of just handing the job off to an unpaid vacant-eyed Fieldston grad with an Adderall Addiction and a ukulele.

Now, because I am a KIND AND FAIR MAN and lover of Krautrock and Borges and Rushdie and Graham Greene and Jerry Brown and Wim Wenders and Morrissey, and because I am a good and fair person, I am willing to CONSIDER the idea that this was an error of the afore-mentioned Strokes-loving proofreader and not necessarily the ATROCIOUS mistake of an errant fashion reporter who might have been distracted by seeing Bjork in CVS or something like that.

Again, no offense is intended to Ms. Friedman, I really do mean that, though she should do herself a favor AND STOP PRETENDING TO LIKE THOSE CRAPPY RADIOHEAD ALBUMS FULL OF DRIFTING, POINTLESS SONGS, the world will STILL revolve on its’ axis if you JUST COME OUT AND ADMIT YOU DON’T “GET” THOSE RECORDS, instead you should spend some time listening to Porcupine Tree, who are the “REAL” Radiohead. And personally, now that I’ve had a moment to think about it, I think you were right to have not listened to your mother about the LSATS; the future lies in jobs in the health sector. Seriously, Vanessa, I know you’re not going to want to hear this, but if you had worked towards being a Nurse Practitioner, you would have been in A LOT better shape in 8 or 10 years than Deborah (yes, yes, I know it’s pronounced De-BORE-uh). I mean, she is working 16 hours a day at that law firm, and she will NEVER make partner, mark my words.

P.S. The preceding is purely the opinion of Monsieur Sommer, and any insinuations about the character or history of Ms. Friedman are entirely for amusement purposes only. I am certain Ms. Friedman is a very nice person who I might have had coffee with 30 years ago while discussing Japanese cinema, R.E.M., Richard Brautigan, and performance art, though the conversation might have gone slightly wrong when I got a little too enthusiastic about the films of Leni Riefenstahl. However, any anger directed at the New York Times is most certainly intentional and deadly serious.