Inevitably, after you compose a Best-Of list you remember the one or three or eight names/albums/bands you’ve omitted.
But there’s one list that’s always been pretty goddamn stable for me, and that’s the list of my favorite bass players. 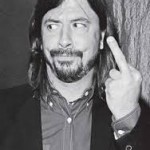 Now, some caveats: I’m pretty much just talking rock/pop here. God knows there are plenty of superlative jazz bassists out there, and probably even a pile of bluegrass, country, and even jammy-band bassists who are most certainly worthy of note; but it’s my list, see, so I am only drawing from the music that I am intensely familiar with. The bottom line here is that these are musicians who have moved me, inspired me, awed me, and made me shake and shiver when I put the headphones on.

So here are my five favorite bassists, in no real order, details to follow.

Okay. First, why no John Entwistle? Good question. Let’s call that the Pet Sounds exception. When we assemble lists of our ten favorite albums, often we omit Pet Sounds because it is so fucking obvious that Pet Sounds is the best album ever made; I mean, we just take that as a given, and we allow our list to blossom without re-stating the obvious. Entwistle’s style is so distinct – he thinks like a pianist, he attacks like a drummer, he has the attention of a court reporter, and blows through the speakers like rolling thunder – that he defies anything we normally think of as bass playing; in fact, his style is so distinctly unique to him that anyone who even vaguely imitates Entwistle sounds like fucking nonsense. I mean, as far as bassists go, he’s a genre to himself, a list to himself, and all the rules that apply to other bassists don’t apply to him; on paper, everything Entwistle does should make him one of the worst bassists of all time, but instead, in his magical hands and fingers, these same actions add up to the most truly gifted and original rock bassist of this or any other era. So let’s just throw him off the list but assume he hovers over us all, sort of like Q from Star Trek.

Jah Wobble. See, bass is, first and foremost, bass, and Jah Wobble plays bass. Wobble takes the deep simplicity and low-end flub of reggae, adds a touch of Holger Czukay high-end balletic plies and twirls, integrates it into deeply catchy melodic parts, and then, most remarkably, finds bands/recordings that not only perfectly frame his very unique mindset, but actually put him at the center. Public Image Limited (especially – no, specifically – on their masterpiece, Second Edition) were likely the first non-jazz band I heard (apart from reggae groups and Can) where the bass was the dominant instrument; in PIL, the guitars scratched and whinnied, the drums were beautifully and almost childishly simple, and the band essentially focused on Wobbles’ deep, deeply infectious, completely hypnotic throb, perfectly complimented by Lydon’s come-to-Allah vocals. Like Dee Dee Ramone or Mondrian or Jasper Johns, it takes an utter fucking genius to know that less less less is more more more, and that sometimes the answer is so obvious only the most spectacular originator has the courage to reveal it.

Paul McCartney. The Beatles are so many other things that it’s bloody easy to forget that Paul McCartney not only defined rock/pop bass playing – no one played remotely like him until he came along – but also that his work is constantly rewarding and a continuously happy surprise, no matter how goddamn over-familiar those songs are. Honestly, I don’t know where McCartney’s style came from – he runs melodic scales around virtually every simple chord, occasionally dipping into gorgeously executed shortnin’ bread runs just to prove he’s listened to the left-hand of a lot of great rock’n’roll pianists. Almost literally nothing he does is obvious, and almost literally nothing he does draws attention to itself. I can’t think of a single other player – except perhaps session goddess Carol Kaye – who can pull that off. I do wonder where it came from, how he landed on this melodic invention and masterful awareness of the chord being underlined; the only thing I can think of is that when he was forced to take the bass role in the Fabs (following the departure of Stuart Sutcliffe and after Chaz Newby declined the job), McCartney decided to model himself after piano players, and not other bassists.

Lemmy. With Motorhead, Lemmy redefined the bass as a low-end AND high-end instrument that could do the work of three rhythm guitars, placing a Branca-esque multi-instrument GUWRRRROAR right in the middle of Motorhead’s Blue Cheer-meets-Ramones overdrive…and if he had only been in Motorhead, Lemmy would almost certainly belong in the top 5. But when you add his work in Hawkwind, not only have do you have someone who definitely belongs in the top 5, but you have a very credible candidate for the number one position (after Entwistle, of course). If you haven’t “studied” Lemmy’s work with Hawkwind, it is a revelation; he had a rhythm-guitarists approach to pulse and tempo, but to this he added a space-bassman’s head for melody and an extraordinarily inventive use of chords and major and minor two-note double time phrasing that makes him sound like Holger Czukay playing in the Stooges (in fact, based on his two-note upper-neck chord word, it sounds like Lemmy was listening to a lot of Can). Lemmy’s four-to-the-floor (and sometimes double-timed) drive, chordal support, and melodic sense is one of the elements that made Hawkwind during his ’71 – ’75 tenure one of the greatest rock bands of all time, and with Motorhead, he re-invented the bass as The Mother of All Rhythm Guitars.

In his work with the Stranglers (and his stunning 1979 bass-centric solo album, Euroman Cometh), J.J. Burnel applied some of Entwistle’s typewriter-attack dexterity and quasi-classical guitar technique to a punk rock agro-model; the result made Burnel of the most distinctive and immediately identifiable players of the last 40 years, and one of the only immediately recognizable master-class-level bassists of the punk era. Along with Lemmy, he has a brutal and delicious trademark – a gritty, treble-heavy new-string grunt that is a joy to listen to. Also, when called upon, he can deliver Moroder 16-note-to-the-bar pulse better than any flesh and blood bassist.

Speaking of Holger Czukay…years before PiL, Primus, or the loathsome ELP, Czukay announced that a rock band could essentially be centered around a bass that would simultaneously act as a lead and a rhythm instrument. Incalculably influential – Wobble and Les Claypool owe their very existence to Czukay, Flea is a bro’d-up imitation of him, and as stated in the last paragraph, it appears Lemmy was studying him pretty closely, too – with Can (beginning in 1968), Czukay threw away all the McCartney chord-based melodicism and blues-run-thumps that were the backbone of bass playing up until then – I mean he literally threw all that out the window, and approached the bass as an entirely new adventure in an utterly unprecedented way, attacking the electric bass with a bizarre and effective combination of jazz-thinking and Krautrock simplicity. He always seems to be playing more than one note at once, he often seems to be playing at double-time, and he generally sounds like a rubber-band ball bouncing up and down an Escher staircase. Literally no bassist has any excuse for not studying Czukay’s work with Can. JESUS, WATCH THIS FREAKING CLIP:

CAN YOU FREAKING BELIEVE THAT?!? 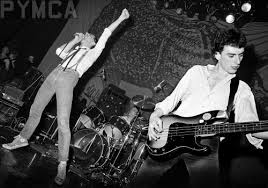 Honorary Mentions? Sure, why not. Again, these reflect my own personal biases in a pretty significant way: Like Wobble and Czukay, Peter Hook (of New Order/Joy Division) played in such a way as to insist that the bass was the dominant instrument in his band(s), and created the melodic hooks (no pun intended) that remained in people’s consciousness. Also, with songs like “Love Will Tear Us Apart” and “Ceremony,” Hook played single note melodic lines as the primary bass part, molding the ear candy that resonated with the listener, perhaps even more than the vocal melody did. Segs Jennings of the Ruts/Ruts DC was one of those extraordinarily adept musicians who just happened to land in a punk band, and bought his own madly creative mixture of reggae and classic rock into the Ruts without making any compromises; he was (and is) also one of the sharpest looking bassists I’ve ever seen, and I will personally note that I probably took up bass because he looked so good playing it. Finally, no piece like this can be written without including Dee Dee Ramone; his truly revolutionary insistence on reducing bass-playing to tonic-note riding and nothing but tonic note riding makes him the Picasso of bassists (and it was most definitely a choice, not a limitation).
Be Sociable, Share!

Tale of the Tweets: The Brooklyn Book Festival