Do you know what a “Familiar” is?  A Familiar is an object or entity that appears in varying guises to assist you or accompany you on your travels.

We likely all have artists or bands that are our Familiars, even if we’ve never quite identified them like that.  These are artists who “follow” us through every stage of life, whose work we continually turn to for inspiration, comfort, and distraction.

These Familiars generally won’t be someone hugely obvious, because there has to be something about them that belong just to us. At the same time, they can’t be so obscure, because the Familiar also has to be a device by which we find friends and like-minded tribe members.   For instance, the ubiquity of the Beatles precludes them having that kind of “special” attachment to our inner life and self-definition.  Likewise, the Familiar must be an artist who has stood the test of time; there are certain artists who may have flared briefly as obsessions, and who served as utile social conduits, but later seemed irrelevant. For instance, I may have been deeply attached to Elvis Costello when I was 15 and 16 and virtually obsessed with the Jam when I was 16 to18, but the work of neither artist seemed to carry much power with me as I moved on in life.

Since the age of 13 or so, the Kinks have been my Familiar. 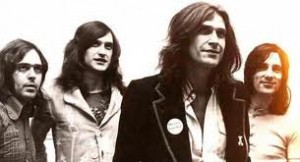 Strangely, I wouldn’t say they were my favorite band – that would probably be the Damned, or Neu!, or the Stranglers, or the Who, or Hawkwind.  But they have been the band that has always been with me; they have a song, a creative period, an album, for every stage of my life. They are the doorframe I measured my height alongside.

The Kinks likely became my Familiar because I believe that they were The Beatles For Outsiders (for a certain age group, that is; this notion really only applies to listeners who came of age between, say, 1970 and 1980).  To be The Beatles For Outsiders, you had to be popular enough to form a clique, but underground enough to form a cult; also, you had to generate enough pop memes to promote relatively easy proselytization, but have enough musical quirks to be a beautiful secret to share. And you had to carry with you some aura of sexual mystery or ambiguity (in the 1970s, before punk became an “easy” totem to distinguish separation from the mainstream, flaunting some degree of ambiguity about your sexual associations was an extremely utile way to announce that you were not like everybody else).

In the Beatles for Outsiders category, really only Bowie was in the same league as the Kinks.  And the Kinks were a group, so they won, by default.

My own first awareness of the Kinks probably came from one or two sources:  at some point I saw a deliciously sloppy, almost shambolic appearance on a TV show that seemed so absolutely antithetical to the precise mewling we usually saw on network TV that it was a virtual call to arms.  And at another time, not to far removed from this TV exposure, I heard “You Really Got Me,” and it was immediately one of those handful of songs that seemed to have always been there, always waiting for you; do you know what I am talking about?  There are a few, very few songs, that when you hear them for the first time, they seem to speak to some need in you, seem to announce “There is something in this song that personifies a crucial and lasting aspect of your creative and cultural identity.”  It is almost as if these songs represent transmigrated memes from a previous life.  I can name very, very few of these “instant” friends:  The Velvets’ “I’m Waiting for the Man,” “Hallogallo” by Neu!, and the Kinks’ “You Really Got Me.”

These first entry points – the absolutely adorable brutality and shocking simplicity of “You Really Got Me” and the dissolute, dirty, honking TV performance — made me instantly seek out everything I could find about the Kinks.  The somewhat spotty early albums and the harder-to-find mid-period records didn’t quite do the trick, so I ended up playing three albums over and over and over again:  Kinks Kronikles, which remains perhaps the greatest band compilation album of all time; Lola Vs. Powerman; and the newly-released Sleepwalker.  Now, Kronikles works – really works – because it was not at all shy of including oddities, and in the late ‘60s and very early 1970s, the Kinks’ oddities – unreleased tracks like “Berkeley Mews,” B-sides like “Polly,” “She’s Got Everything,” and “Susannah’s Still Alive” — were superb, a complete career unto themselves.  As for the Lola Vs. Powerman album, it was (and is) in many ways the Kinks’ most complete album, and virtually alone amongst the Kinks’ catalog, it could be played unapologetically to mainstream-loving friends you wanted to convert without needing any explanation regarding the British political and cultural memes that saturated so much of the Kinks work.  And Sleepwalker was solid, full of crisp FM sounds, Kinks-branded riffs, and just a touch of textual weirdness.  Personally, I think it’s the last great Kinks album, and it’s still one of my favorites.

As time goes on – and it has been a desperately long time since then, a child born on the day Sleepwalker was released would be nearly 38 now – my appreciation for the Kinks has evolved:  For instance, today my favorite Kinks’ albums are the deeply blue and earth-toned Muswell Hillbillies and the sad painted-smile British music hall-via-New Orleans sighs of Everybody’s In Showbiz. But the Kinks are still very much my Familiar.  They’ve aged with me as no other band has, and I always return to them, again and again, unearthing new treasures and finding a song that seems to be speak to me, even as “me” has changed and changed.

Why was I inspired to write this, now?  Well, obviously, there’s a fiftieth anniversary mishegas, and some controversy about whether Ray and Dave and Mick can bury their long-honed hatchets long enough to tour; but I have virtually zero interest in seeing a renascent Kinks; my memories of raucous, spitting, leaping, surprising shows at the Palladium in the 1970s is plenty enough for me.  But there are two new releases worthy of note:  The Essential Kinks is very worthwhile 2-disc compilation, and even if it omits the quirks of Kronikles, it’s probably the best inclusive career retrospective out there, especially keeping in mind that getting the early hits and the mid-60s heart-scratchers and the highlights of the ‘70s concept albums plus the best of the late ‘70s/’80s “mainstream” period ALL ON ONE RECORD is virtually impossible; but The Essential Kinks does a pretty good job assembling an overview for a band whose creative/cultural diversity (not to mention competing label association) has so far created a situation that largely defies reliable compilation. Oh, and it’s also good to hear some first-rate mastering on this stuff (though, to be frank, the Ray Davies-production style of the mid/late ‘60s and early 1970s was so high-end unfriendly as to almost make good mastering a negative).  WOW this sounds like a REAL record review!

The other new Kinks-related release worthy of note is Dave Davies’ delicious, sensitive, rousing, and surprising new album, Rippin’ Up Time.  These days, Dave seems to do the slice-of-life observation thing better than Ray does; when you add to this the fact that with age, Dave’s voice, once notably higher in range than Ray’s, has dropped into precisely Ray’s classic wheelhouse (at times he sounds exactly like Ray, and that’s never happened before), and then bring in the fact that Dave has an acute ear for song-arrangement that seems to hearken back to the Kinks’ Face To Face/Something Else/Village Green peaks, what you have here is the album you wish Ray would make.  Now, add to this the fact that Dave Davies has a willingness to experiment musically and go on emotional and creative limbs that Ray hasn’t dared to go on in nearly forty years, and you have a small treasure of an album with Rippin’ Up Time, which threatens, in places, to become a much larger treasure.

The simplest way to end an article would be to write “God Save the Kinks.”  But that’s implied, isn’t it?  The Kinks, along with, perhaps, R.E.M. – are the bands of my life, the logo stickers on my permanent school-locker.  So let me just conclude by saying “Sting is a tool.”