Evan Dando and Johnny Depp were standing in the door of my office.

It was early 1993. I was working for Atlantic Records, and I was a relatively new A&R person at the label. My office was on the 8th floor of a 9-story building on Sunset Boulevard just west of Doheny, at the bend where Beverly Hills becomes Sunset Boulevard. The building occupies about a quarter of the block and says CITY NATIONAL BANK on it in big letters. The bone-colored, slightly cocky structure has a very “It’s 1960!” feel to it, and I used to amuse myself by pretending that Milburn Drysdale and Miss Hathaway worked at the bank downstairs. Then, as now, I am easily amused. 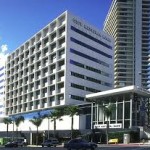 One evening I was doing some late work sorting receipts (or maybe I was just watching Sportscenter). I was fairly certain I was the only person left on the 8th floor. The sky was turning deep blue ripped with orange and the asymmetrical circus of the Sunset Strip was cracking open outside my window.

The two gentleman in the doorway, scruffy and puffy and beautiful and happy-shabby and looking both deflated and inflated, like two balloons at the end of a very long party, were leaning a little against each other and a little against an invisible lamppost. They were either very tired or very distorted or both.

Evan was pretty hot at the moment. The Lemonheads’ “It’s A Shame About Ray” album had become a big college radio hit. Evan was a fairly frequent presence at the Los Angeles office; his A&R person was based there (the wonderful, kind, and courageous Tom Carolan, who was a great inspiration in my own travels at Atlantic), and a lot of people in the L.A. office had taken particular interest in breaking the Lemonheads. Evan was alternately sweet and charming and nearly catatonic; he functioned as if his brain was a flash card, and you never knew if you were going to get the blank side or the side with the writing on it. We had some small prior relationship (an earlier band of his had once opened up for my group, Hugo Largo), and often he treated me like an old friend. Other times, however, he looked at me as if I was a complete stranger.

Tonight, he was sweet and smiley. He introduced his friend John, and asked if they could bum some Marlboros and listen to some music. I was known as being one of the few people in the office who smoked (inter-office tobacco consumption was still legal at this time, even in Los Angeles). 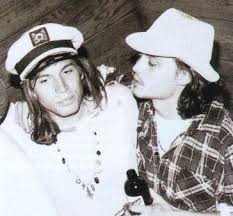 Evan Dando and Johnny Depp, around the time this story takes place.

So they sat in the big chairs on the other side of my desk, took long, lazy, cinematic puffs on the reds, and we listened to Stereolab. The two of them had a very peculiar look on their faces, like Cheshire Cats on a raft in a candy-colored sea; they grinned, boldly and childishly, a little bit lost and little bit found. They looked like two children who had pooped in each other’s pants.

After a short while of amiable staring and perfectly successful non-conversation, Evan informed me that he and Johnny were in the middle of an acid trip. This news came as no surprise to me, and there was something deliciously matter-of-fact about the whole situation.

After two cigarettes each, sucked down to the filter, Johnny and Evan politely nodded goodbye with a duck of a chin and a half wave, and they were off.

Now would be a rather excellent time to mention that 9229 Sunset Boulevard was, at that very moment, undergoing extensive renovation on the 8th and 9th floors. A scaffold surrounded the entire building.

I resumed sorting receipts and/or watching Sportscenter. About four or five minutes after John and Evan left, I heard a peculiar noise from outside. It sounded a bit like squirrels inside the walls of your house, or someone doing Foley work for a movie chase scene.

I looked up from my desk, just in time to see Evan Dando and Johnny Depp dart past me – on the outside of the building – running laps around 9229 Sunset on the (very) exposed scaffolding that surrounded the 8th floor. Their dash was accompanied by peals of almost infant laughter. I quickly ascertained that Evan and John had gained access to the scaffolding from an open window somewhere on the floor, and were now racing around the building recklessly, 108 feet or so above Sunset Boulevard.

Around the third time the pair looped around the building, I calmly assessed the situation and how it affected me, Tim Sommer.

1) One of the label’s biggest young artists and a rising Hollywood star were tripping on acid and racing around the building. Clearly, their untimely and rather spectacular death was an imminent possibility. 2) I was very likely the only person on the floor, and the only person who knew this was happening. 3) Since, unlike Dando and Depp, I was not higher than Sly Stone at a Soft Boys Convention, I was very likely the only “responsible” adult on site. 4) However, the likelihood of me getting out on the scaffold to try to stop this tremendously fun-looking but potentially catastrophic event was slim, and would likely only complicate the situation and perhaps add to the possibility for disaster. 5) The headline-grabbing and gruesome defenestration of these famous young people would almost certainly reflect very badly on me, The Responsible and Sober Adult on the Scene, and I suspected my career as an A&R person would tumble to the pavement with the young superstars. 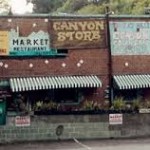 The Canyon Store in Laurel Canyon, Los Angeles. It figures only incidentally in this remarkable, psychedelic, and decadent tale.

I got into the elevator, rode down to the garage, drove eight minutes to my little house behind the Canyon Store in Laurel Canyon, and turned on the TV to await the breaking news of the death of Johnny Depp and Evan Dando in a bizarre accident.

When no such news was announced, I picked up the phone, called a friend – I think it was Bobbi Gale, a publicist who knew Evan well — and said, “The strangest thing just happened.”

Wait, that last part didn’t happen. He didn’t say that. But I wish he did.

Are These The Five Cutest Cats In Brooklyn?

Struggle Bus Episode 6: Double Decker Struggle Buses, the Perfect Word to Describe Your Sexuality to Everyone (Does Not Exist), and (More) Clarifications on Catcalling